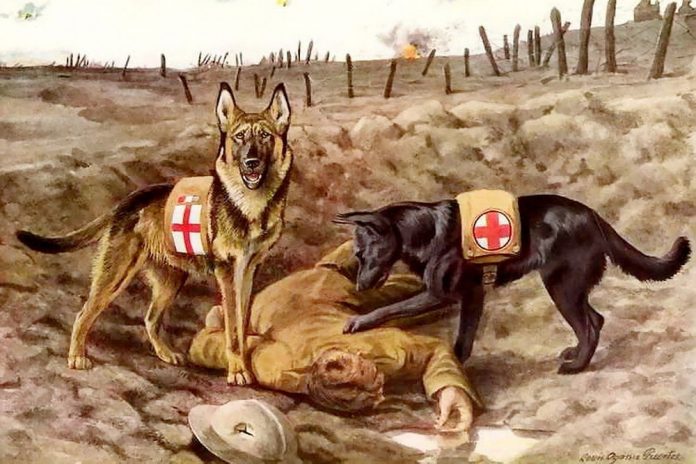 During the war in Ancient Greece and Rome, dogs were equipped with spiked collars and were send forward to attack the enemy. During the Middle Ages, dogs were outfitted with armor and were used for caravan defense. At the beginning of 20th century, most of the European armies employed dogs for variety of roles.

Russia use ambulance dogs during the war with Japan, the Bulgarians and the Italians used sentry dogs and the British Empire used protection dogs during the Abor Expedition in the Himalayas.

At the beginning of the Second World War, the British Veterinary Army Corps, used the Alsatian, which was just another name for the German Shepherd, but they also used Dobermans, Airdale Terriers and Rottweilers. But, in 1943 they have realized that high blood pedigree is not as important as they first thought, and that any dog could be trained to perform well, to be quiet and dependable, so they employed Alsatian-mixed dogs instead of the purebred.

On the other side of the ocean, U.S Marine Corps who were fighting in the Pacific preferred the Doberman Pinchers as their dogs of service. It was so popular that it became the official dog of the USMC and got the nickname “Devil Dog”. In both 1942 and 1943 there was many dog breed who were taken in consideration to be trained as army dogs, but there were a lot of issues with them.

The Great Danes did not performed well because of their large body size and the hunting dogs often became too much distracted from the animal scents.  By 1944, the number of dog breeds that were using as army dogs was reduced and the USMC used mostly German Shepherds, Belgian Sheep Dogs and Doberman Pinchers.

According to the Nazi propaganda, the German Shepherd was superior dog and it was used in most of the cases. But, as the war was going on it became usual for Dobermans and other breeds to be seen as army dogs of the German Army. 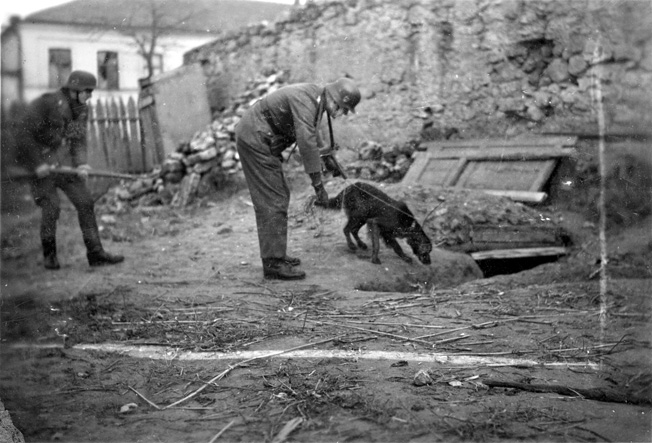 The most gruesome use of war dogs was on the Eastern Front. In 1942, operation Barbarossa started and surprised the Soviets. The first four months they have already lost big number of their tanks and anti-tank weapons, and their industry was heavily damaged by the sudden attack. As the German tanks proceed toward Leningrad and Moscow, the Soviets were desperate to find a way to stop their advance. Dogs were trained to run under the German tanks with anti-tank mines attached to their backs.

Dogs of all breeds as well as stray dogs, were equipped with body harness (something like today’s dog backpacks) carrying as much as 25 pounds of explosive. Once when the canine went under the enemy tank, the explosive was detonated remotely and it should destroy the tank from beneath.

It was amazing idea, while on a paper except for the poor dogs and it was one-shot weapon. The training for this dogs was in progress and the Soviet dog handlers were feeding the dogs while they were under the tanks, but the smell of the Soviet and the German tanks was different. Then, another method was involved in the training.

The dogs were released at realistic war training and once when they panicked, the only thing they found as a hideout was – under tanks. When the German Army got information about this unusual weapon dogs, they started killing all dogs they have seen. There are quite few reports that the use of this anti-tank dogs was successful but, luckily for the dogs, after 1943 the Soviets stopped to use them for the role. 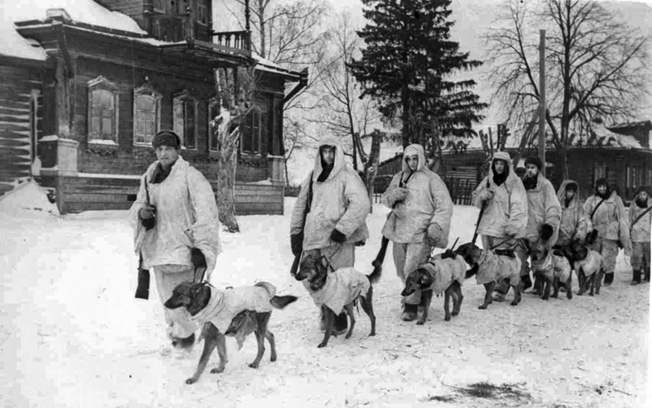 A more noble and humanitarian role was the introduction of Medical Corps dogs. This dogs were trained to locate wounded soldier on the battlefield and drag it to safety. Their use was most notable in the Eastern Front, where the killing was so intense that, thanks to this dogs, countless lives were saved.

This dogs were trained to ignore all men who were standing and to concentrate on those that are alive but laying down. Once they located wounded soldier, they would start dragging him and the Medic would come to give him first aid.