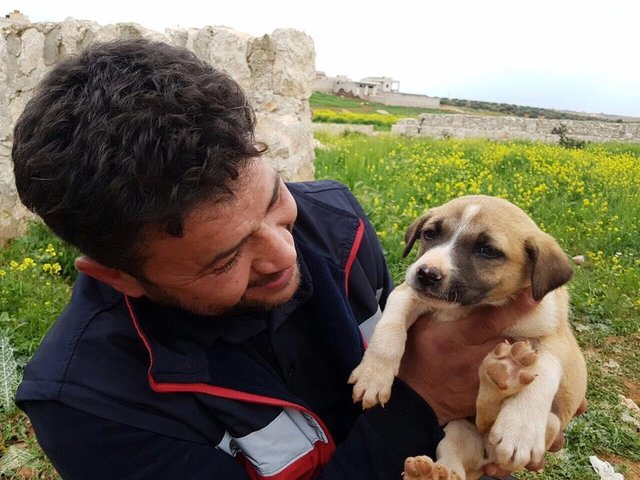 Local man from Aleppo, known as Alaa or “the cat man of Aleppo” started a cat sanctuary in Aleppo, Syria. Mohammad Alaa Jaleel, former ambulance driver is one of the few people in this war-torn country, that is giving to the local children glimpse of hope during the darkest hours.

With many families fleeing this country since 2012, countless pet cats and dogs were left behind, and Alaa’s sanctuary took them in.During the advancing of the government forces, the sanctuary was bombed but, Alaa stayed to save as many cats he could, until he was forced to flee in order to save his own life.After a few months in Turkey, Alaa returned to Syria and rebuilt the sanctuary and it is already a home for dozen stray and hungry cats.

During March, on a open field just across his sanctuary, Alaa came across a hungry dog. When he came closer, “the cat man of Aleppo” saw 15 cute puppies – and he wouldn’t be Alaa, if he didn’t help. Even though he is “the cat man of Aleppo” his heart is open to help to all animals. Alaa is going every day to feed the dog and her puppies until he built a suitable house for them at his sanctuary. 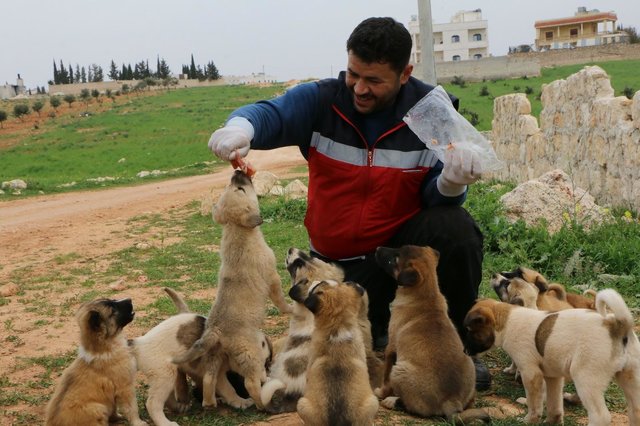 Dogtrophy.com is aiming to help to all people and animal in need, and as you could probably imagine, re-building of sanctuary in a war-torn Syria and feeding of all this animals costs a lot, so if you would like to get to know more about The Cat Man of Aleppo’s mission and make a donation, you can follow his Facebook Group here.

RELATED ARTICLE:  Do Dogs Get Colds? Symptoms and Treatment

It is truly inspiring and it should be a lesson to all the people in the world, that even in the darkest times love is the answer.