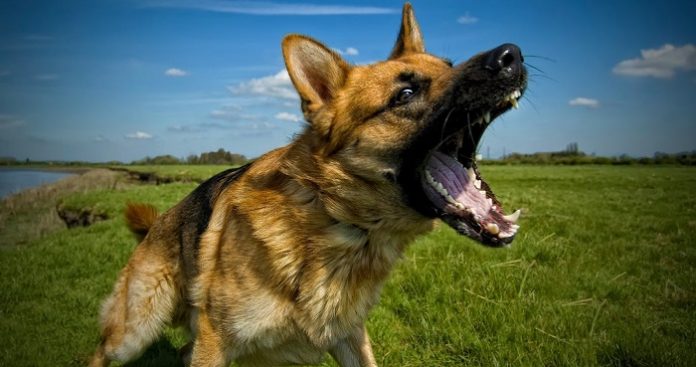 In many cases animals are struggling for food, accommodation and mating partner, or for the territory where they can provide it. If there is not enough food or water, one will survive that will be able to win it. These reasons are clarity and why dogs behave aggressively. In animals conflicts are resolved through ritualized behaviors in which rivals show their strength. In reality, the real aggression rarely pays off as the winner in combat loses tremendous strength and can be hurt.

And our dogs through ritualized behavior and aggression with no attack try to expel one who considers it a threat, regardless of whether it is another dog or man. So for that reason we can expect from a dog who protects his territory or man, barking, aggression against people and the like.

Aggressive behavior becomes a problem at a time when the very degree of aggression is high, that is unacceptable for the community in which the dog lives. An aggressive dog can attack people, dogs, and other animals. The selection made by the man with the domestication has contributed to the different types of dogs that have overstated the physical characteristics and behavioral characteristics.

Stressing aggression has led to the situation that some types of dogs become more aggressive compared to other dogs and could be used for protection or entertainment. Such types of dogs attack other houses very quickly, they easily tolerate pain and reduce normal behavior that is characteristic of communication before attack.

Before the attack, animals from the group Canidae (including: the wolf, the coyote and the gravel) show a certain position of the body, a face expression and a behavior that expresses the mood and intention, while the aggressive attitude in normal cases ceases when one of the dogs shows withdrawal behavior.

The pressure of human selection in certain types of dogs has reduced the true communication that shows the motivation or intention of aggression. So for that reason, these types of dogs attack unexpectedly and the attack does not stop with the withdrawal of the opponent. However, the pronounced aggressiveness of certain types of dogs to others does not mean aggression towards people, and in most cases it has been shown that owners easily manage their dogs particularly aggressive dogs.

So aggressive behavior can in some way be understood as normal behavior. It may happen that you are biting a dog, but for such a move from their perspective there is a reason for that. So the biggest responsibility is the owner who wants to have a big and strong dog that he should do everything in order not to get his dog to attack someone.

Historically, from all domestic animals, dogs and people in history first have became closer. The primitive people accepted the ancestors of the dogs, that is, the ancestors of the wolf as their company, and gave preference to the animal species that participated with them in hunting and defense.

So man initially picked those dogs that were big and strong but at the same time aggressive because they acted terribly and intimidating and could cause more aunts. However, due to the large panic of dangerous dogs, research has shown that most dog attacks are in those countries and those types of dogs that are most popular and numerous.

If you really want your dog, you need to accept its nature and carefully focus its features in the least dangerous way. For example, you can give to the dog toys and bones that can throw them, give him a ball to play, stimulate him to look for certain scents and the like.

RELATED ARTICLE:  You May Not Known These Interesting Facts About Dalmatians

So everyone who has a dog should know that he live with a small beast and that as a responsible person he needs to take all the steps that are needed so that this small beast can be happy and humble and never want to bite someone. It is becoming increasingly clear that the owners of small dog breeds have a problem because when they come to aggressive behavior they take their pet in their hands.

Related article: Your Dog is Barking too much? No problem…

There is nothing to do with aggressive behavior! If the dog bites means that there is a reason for it in his perspective. Perhaps the dog is mentally ill, may have bad experiences from before, or maybe the perception was wrong to him.When it comes to assessing whether the dog that has bite is a dangerous dog, it is important to know whether it is healthy or not. So aggression can be caused by some health problems such as hurting or disturbing the work of the thyroid gland, or if the dog does not see and does not listen well or hardly perceives because it is old and dementia.

The mechanism of aggression can also be associated with hormones such as small puppies. A feminine woman can defend her youth from other dogs and other animals. Aggression between the two men and the two women may also be related to hormones and from there it is rare in the dogs that are castrated. Aggression is a hereditary trait and often occurs in certain dog families. For example, scientists are particularly interested in gold retrievers because they are of American origin and have aggressively developed unnecessarily.

It can be said that the only solution to these problems is good quality training. Training means that dogs are learning in some words in an easy way because learning adjusts their way of functioning and thinking. The dogs want to learn new words and understand what the owner is saying to them.

Furthermore, regarding the dogs and the owner, the most important thing is trust: the dogs should listen to the partner because they trust and respect him. In such an environment, learning is the highest quality. Dogs can execute commands because of fear if they are punished for errors, but every punishment brings consequences and does not solve the desire of a dog to do the net, because the dog suppresses the desire that still exists.

In the relationship between the owner and the dog, the most important thing is trust because the dogs should carry out the orders of the owner because they trust and respect him. In such an environment, learning is the highest quality.