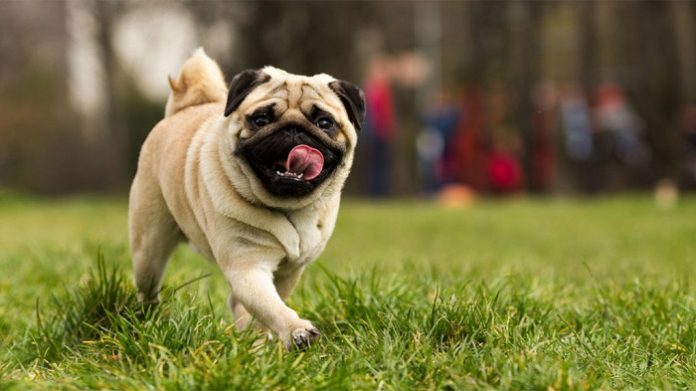 Only the name of mops or pag speak enough about the nature of the race, actually the nature did not endow this race with enviable beauty, but it did not save on an overwhelming charm.

The mops is often described with “multum and parvo” – much in the small – just like the famous French military leader who just one mop managed to get out of the bed of the first wedding night.

The homeland of the mops is China. Also mops were respected by the Tibetan monks. It is therefore believed that the breed of happa, something like a short-skater pekingese, a mops of a further cousin, or even a looser, is even more similar to the constitution, as evidenced by the records from 1115 BC. However, the race trail is lost after 663 BC, but from 732 BC, the so-called Sechuan dog of the short muzzle was known, who came to Japan from among the gifts from Korea.

That the mops enjoyed the imperial life speaks one story of the Chinese emperor Ling Ti (168-190 BC) who “decorated” his nickname with the official belt and cap of the noble act. To the dog, this honor must have fallen seriously, followed the fact that the front of the titular hat was about 20 centimeters tall with a half-short tail and a circumference of nearly 26 centimeters wide.

He conquered his overseas miles with the hearts of European sailors, taking his place on the wings of the kings and nobles of the old continent.As he arrived at the European ports, the unusual little dog got another names. The name pag is presumed to have originated from the Chinese name for this race – “pai”. In English dictionaries, the “pag” phrase appeared at the beginning of the 18th century, with the meaning of “a monkey or a dog nickname”.

Although “monkey” was not a strange, witty mop, he shared this nickname with a marmoset, a dwarf-type monkey, which was also popular as a pets. What merged them is in fact a similar figure of shortened nose and round eyes. The name pag is also believed to have originated from the Latin word pugnu, which in translation means a poet, which can remind the wrinkled face of this cheerleader, while some fans of this race insist on the idea that his name was given to Shakespeare’s unlucky hero Pako from the play “San summer night “. Although the linguists completely dispute this thesis, it must be admitted that it sounds far more romantic than the Latin poet.

In the continental part of Europe, the name Mops is derived from the Dutch verb mopperen, as his scowling face can give for any criticism of the boss’s order. Otherwise, the Netherlands has the greatest credit for its popularization in Europe. Through the Dutch East India Company, mops arrived on the shores of Europe. He obtained the reputation of the rescuer and faithful companion as a fox of the Dutch prince William and the Silent.

From the beginning of the 16th century, he set up mopps for the pets of the Dutch throne, according to which one of these little babies woke the prince and thus saved him from certain death in the sudden attack of Spanish troops. And the Russian court fell in front of his paws, especially the cousin of Catherine the Great, whom even a pocket of these monks accompanied the worshipers.

On the spikes of the old glory, the love for the mops again blossoms, in America, right after the Civil War. Since then, the establishment of clubs of lovers, kennels that compete for the best examples in the mops category “dog-toys” begins. Today it is valid for the most popular pet in American homes.

Mops’ appearance, although a nice thing for individuals, was challenging and exotic enough for many paintings. Thus, he became the motto of Goya’s works, and he had his share in the well-known self-portrait of William Hogart, as well as his other paintings. In the German city near Dresden, Mysen, very expensive porcelain pieces were produced, and among the rare and very valuable ones are those who painted the mops.

Amusing shots with cute lullabies were bought by many lovers of dogs, who decided to love him as a pet. A playful, and at the same time a fan of beds, is ideal for flats, as well as due to its size and nature. They often describe it with “multum and parvo” – many in the small. Compact, wide, muscular, and easily formed in the lap, but in the heart.Mops’ adherence to bosses describes owners as if a man gets his second shadow – the mops follow the boss in the foot, does not let his face look out of sight, and even when he knows he has made a mistake, he shakes his head aside. However, such a relationship threatens to become too protective for which the owner must remain the leader of that two-member pack.

His intelligence should not be underestimated, so every good work should be properly rewarded. It does not tolerate uniformity, so over and over again on the command “give a paw” turn the twisted tail and look for a break on the couch. A high tone of voice and fuss does not succeed in it, they just blur the defect of what the owner can bring in broken flowers, destroyed slippage, or some nasty cable. That is why only self-confident owners can convince themselves that they are trying to compete with the agility competition with their own peppermint. The stories about the mops, which in the course of the ending in the disciplines, simply come to the back and begin to chase on the grass or return to the starting position, doing again tricks. The audience’s laughter further encourages them, which best reflects the fact that mops live to enlighten people. Perhaps that is why his first breeders were Tibetan monks – patience and tact are decisive factors in educating mops as a new family member.

Mops is a very peaceful and humble guard. The owners claim that the burglar would hold the lamp, and the children could feel completely safe in its vicinity. Of course, as long as they treat him as a dog, not as a toy.Still, what the future owners should be prepared for is that it is noisier than other dogs. And not for barking.

His sounds are coming from the throat due to the innate brachyphalic skull, so every snort is accompanied by loud snoring. If people with a light sleep split a bed with a mop, sleeping for them will not be, and should not surprise even a casual unpleasant smell. A short muzzle, and so short bumps, often create gases in the intestines, which find their way either with or without sound. The smell will not be missed. Although not afraid, it does not mean that the owner will not get a wet kiss after the affair. Shortened nasal canals, and here, “made your fingers”, so that only his nose will remain dry from his snuff.

To the owners of the mop of torment, his coat is laid. Although the mops do not clenched, the hairdresser’s departure due to furmination, or the removal of the undercoat and excess fur, is recommended every five weeks. While bathing should not be exaggerated, everyday brushing is mandatory or his hair will cover all the upholstery in the house. People often opt for the color of the race that matches the furniture – silver, apricot, brown or black. Thin fur does not protect it sufficiently from cold, so the coat during the winter days is not just a fashion accessory. However, owners can also experiment with those who almost look like costumes, because the mops will enjoy the attention and enthusiasm of passers-by.

The warm year is also not pleasant to him, so the bowl with water must always be available, and exposure to the sun is recommended to a lesser degree, both due to the danger of heat stroke and sensitive skin.It is necessary to clean facial creams due to possible inflammation of the skin, and for a lighter step, the nails must be neat and shortened.However, daily shorter walking tours are more than recommended. Swimming, too, is not his discipline, so sea pictures with a bismuth can be made only on dry, away from water. If she loves swimming, it is obligatory to keep the shore, because she can drown due to poor fitness.

A long life span, which according to veterinarian data ranges from 12 to 15 years, can provide proper care and cultivation. No matter how hard it is to refuse his petting look, treats and snacks must be strictly controlled. Mops are prone to cultivation, and excess weight can at least harm the load of the joints. The ideal weight of the mops ranges from six to nine kilograms.
When choosing a puppy, the prospective owner should take into account the selection of the breeder. Mops in the genetic code have a predisposition for certain diseases that should not be combined with the disadvantages of other races. The hellish mops puppy is playful, well-fed, smooth fur and bright eyes.

What genetically monitors the rash of the mops are health problems with knee cartilage that weakens with age or impairs hips or dysplasia. The only solution in these cases is surgery, although the disease is not necessary.
Also, the only surgical solution is the hereditary tingling of the nostrils, which is why the dog may have breathing problems. In some cases, it can live with this defect, but when the soft palate is far longer and closes the part of the larynx, surgical intervention is mandatory.A very rare but deadly disease, unfortunately, even carries the name of the race – “mops encephalitis”. Inflammation of the central nervous system that involves the brain or spinal cord without an infectious cause is still a mystery to veterinary circles. The disease occurs mainly in young individuals, and after a series of severe epileptic seizures, fatal outcome is inevitable.

Mop eyes are also a special weakness. Its entropion, which represents the growth of eyelashes from the inside of the eyelid. By constant displacement, the hair damages the surface of the eye and often leads to infection. The only and lasting solution is a small scalpel cut.Large eyes of the mops can sometimes almost “dry up”, and such a chronic condition surely leads to blindness. The problem with the so-called “dry eyes”, or lack of tears, is solved by the regular application of drops, although this is rare case of pure-blooded offspring of mops.It is interesting that a female mops rarely bring cubs to the world with a caesarean section due to the larger volume of puppies.