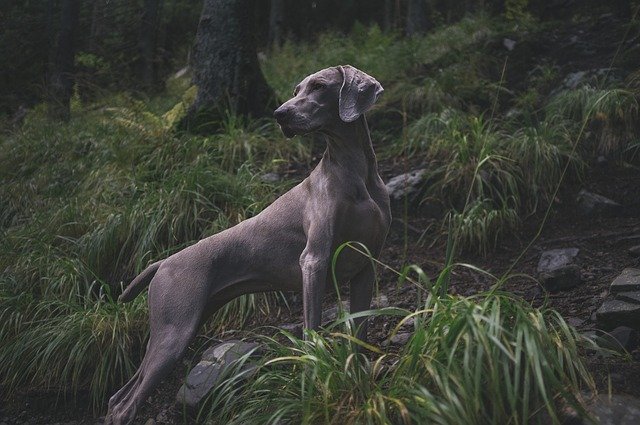 This beautiful breed, also known as the ‘Silver Ghost’, is best known for its gray fur and light blue eyes. Although a hunter by nature, the Weimaraner acts and behaves like a true aristocrat. Weimaraner was created with the intention of being a fast and agile dog and having a keen sense of smell. He is a very skilled hunter of both big and small game.

This breed of dog has a well-developed body and a long torso, and its tail is properly cut and arranged. Its fur is short and smooth and can range from gray to silver. The distance between the ears is wide and the ears themselves are long and lowered. Their noses are gray and their eye color changes depending on their age.

For this dog breed, we can say that it is quite an active dog and have tremendous energy. They are designed for full-time running, hunting, so they need all-day physical activity. The Weimaraner is a social dog that will never leave you alone. Weimaraner is a very intelligent dog, so in many cases, it is claimed that this dog has a human head. They are easy for a train in the direction it needs to be hunted. Due to the innate instinct, a strong sense of smell, these dogs can be great hunters. They do not like aggression, they are sensitive, so when training you should not use the method of punishment or combine different methods of training.

This breed of dog can have problems with the disease – hip dysplasia, stomach problems, and eye problems. Willebrand’s disease is characteristic of this breed and it means a blood disorder which means that when they are injured the blood does not clot.

Short and silky fur is quite easy to maintain. And when they run through the mud, the dirt doesn’t stick to the fur. You should practice brushing your dog’s fur at least once a week to keep the dog’s fur healthy, silky and shiny.

It is quite important for the proper development of this breed of dog to provide quality food. If we feed this dog properly, we will prolong his life for several years. Although they have strong teeth and jaws, it is not recommended to give them only industrial food. That’s why we need to give him meat, milk, eggs, fish, fruits, vegetables and grains in his diet.
You need to keep in mind that every breed of dog, even this one, has different nutritional needs and what you really need to give it. You can learn how to cook food for your dog on the internet. 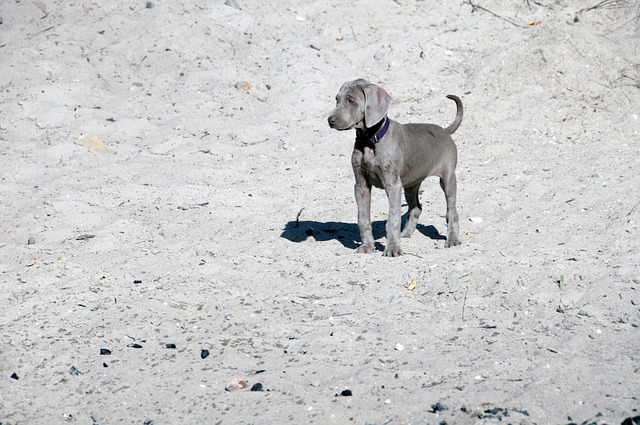 When it comes to puppies, they are not so different from adult dogs. As far as physical characteristics are concerned, the most pronounced difference is reflected in the color of the eyes, which is light gray, light amber or gray-blue, whereas light gray in puppies.

They are very playful and stubborn in character, which is why they require long dressage, which is carried out with a lot of patience and understanding, all for the purpose of getting used to the environment and socialization.

Owners have to control the urge to hunt these dogs from an early age to avoid that when the dogs are old enough, every animal smaller than itself, whether it is a smaller dog or a smaller animal like squirrels, birds, mice, etc. as prey and make them hunt her.

For the Weimaraner, there are theories that it originated from the gray hunting dogs that King Louis IX of France brought from Egypt to Europe in 1250. The Weimaraner is also found in a painting by Anthony van Dyck, painted in 1632 by German Prince Robert von Falz. It can generally be said that this breed of dog developed in the nineteenth century at the Weimar Castle. The Weimaraner is listed in the genealogy as a purebred breed, completely free from further crossbreeding and thus became the oldest German breed of bird. After the First World War, Weimaraners arrived in the United States, and after that moment, began mass popularization, and these dogs were kept for hunting and sports competitions.