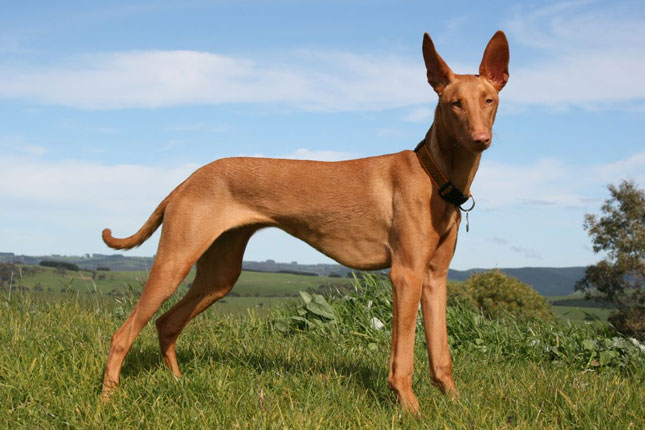 The dilemma of whether the Pharaoh Hound ‘s origin originated in Egypt or Malta is eternal. However, this breed of dog looks so elegant and powerful that it undoubtedly indicates that it has always been a favorite of aristocrats.

The body of this breed of dog is longer than high. The backline is straight. The shoulder blades reach the joints, and the ribs are well distributed. The shoulders are long and firm. The ears are large, raised and triangular. The tail is thicker at the base and narrows towards the top and is worn hanging when the dog is resting and the high bend when the dog is moving. The fur is short, thick and shiny. The color of the fur is a shade of reddish-brown. The fur on the paws and chest, as well as a thin line between the forehead and eyes, can be white.

The head is well sculpted and the ears are straight. The neck is long and muscular. Things around the eyes and nose are the color of meat as well as the inside of the ears. These parts turn red when this breed of dog is ashamed.

Male dogs of this breed can behave aggressively towards other dogs. They have a good relationship with young children. They are specially reserved for strangers. Cats and other dog breeds are not socially friendly. Pharaon Hounds are kind and loyal to their family. They are calm and serious dogs as long as they are indoors. They need to sleep in a warm place because their fur does not protect them from the cold.

The Pharaoh Hound‘s nest is not a guard dog but often barks when a person becomes suspicious. He does not want to be bored with temperament, so if you leave him alone at home for too long, he will bark very loudly.

This breed of dog, as well as some other similar breeds, may have a problem with hereditary health diseases. These can be gastrointestinal diseases and bacterial infections.

The fur of this breed of dog does not require much attention. It is enough to brush with a rubber brush during the miter period to remove dead hair. They are pure dogs that do not give off the typical dog.

The Pharaoh’s Hound is the world’s oldest domestic animal. In ancient Egypt, there was a 4,000 year old painting of two goats hunting for gazelles.

The origin of this dog is from prehistoric times and according to some research, this dog breed may be the result of crossing the wild canids. According to Egyptologists, dogs were a favorite in ancient Egypt and were considered good hunters, loyal followers in the daily lives of kings and the rich and were depicted in several pyramids during the period of the Egyptian kingdoms.

In 1935, a grave was found in a large cemetery west of the Cheops Pyramid in Giza. On the grave is a record of the routine burial ceremony: “A dog that was a good guardian of His Majesty, Abuwtiyuw is his name. He was a pharaonic dog. His Majesty did this so that the dog could be respected before the god Anubis”.

A statue of the Pharaoh Hound has also been found in Tutankhamun’s tomb.
It is believed that the Phoenicians also took these cards when they settled in Malta, and over time these cards have changed significantly. These are now in Malta national Maltese dogs that are kept as rabbit hunters or as property keepers.

The Pharaoh Hound, or dog, was first introduced to England in the early 1930s. It was first shown in the United States in 1967 by Mrs. Harper and the Faraon Dog Club in America.
In 1984 he was placed in the group of Kurds. This famous breed can now be found in many countries around the world.