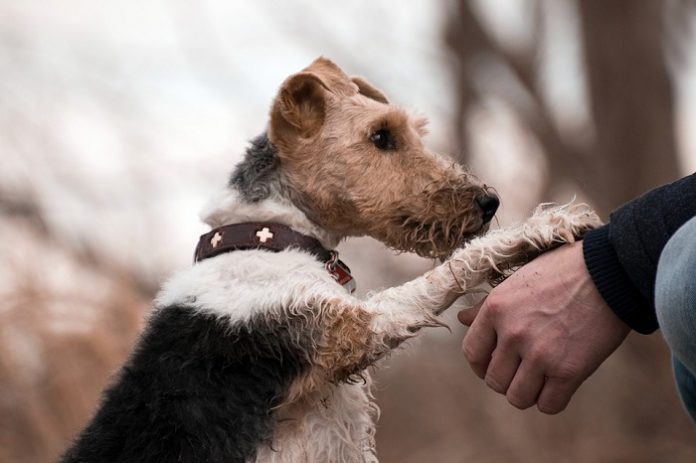 Why do dogs raise their paws? There is no dog owner who does not want to know what his friend thinks and what he is trying to say. Of course, dogs do not speak our language, but they have developed specific body language and if we know it we can communicate fairly successfully.


However, it is necessary for many of the characters that they use to be properly identified and put in the proper context so that there is no confusion. For example, dogs often raise one of their front paws trying to tell us something. Extremely cute, but what can all this mean?

The dog is injured

The first thing to exclude as a reason for raising the paw is some injury or pain that he feels in the raised paw. If he has a cut, a stab, a muscle, tendon or bone injury, he will try to show you this gesture. Also make sure that it does not feel pain due to hot asphalt, cold surfaces such as ice or snow, salt against ice, and even the presence of burdock or poppy pig. If he is still in pain, he is a sure sign that he needs help.

The dog is very focused on something

This is characteristic of hunting dogs. This does not mean that only hunting dogs will show such behavior. Genes are a miracle, and even those not trained in hunting often do so when they want the owner to call attention to something in the area.

The dog is concerned

In the case of non-hunting dogs, pointing to something or someone in the surrounding area may indicate a state of anxiety, fear or stress. A dog may find itself in an uncomfortable situation where it feels unsafe. In addition, the neck and root hairs may be tightened, the ears tightened (sometimes lowered) and agitated in a circle. If you recognize such a situation, immediately remove it from your source of discomfort.

RELATED ARTICLE:  Does the Dog Know What Time it is?

This paw lift has a positive connotation. It is an expression of curiosity and anticipation and is often accompanied by a tilting of the head. They do this when you hold their toy in the expectation of throwing it away or very often while sitting at your desk during lunch. Then they cannot hide the desire to get some delicious piece of your food. It looks cute, but don’t give in – never give it your food!

The dog wants your attention

Sometimes they lift their paw and place it on your knee. In doing so, they wag their tail and look at you with the most wonderful gaze. All this because they want you to pay attention to them. The reason may be the need to get him out of necessity, to play, to be hungry or thirsty, and even to be bored. Answer that call in a positive way and he will always use this type of communication, so it will be easier for you to understand.

Sometimes they raise their paws when they have done something wrong. If they look “wrong”, which means lowered head and ears, avoiding glances and bent body, check around the apartment to see if anything is broken, torn, or if your friend has left you with an unpleasant surprise because he couldn’t stand going outside.

Observe, analyze and interpret! Before making a quick decision about the reason for raising your paw, carefully look at and examine all the circumstances in which your pet is found. Also, pay attention to other signs of their body language so they can interpret the message they send you faster and more accurately and try to respond to them promptly.