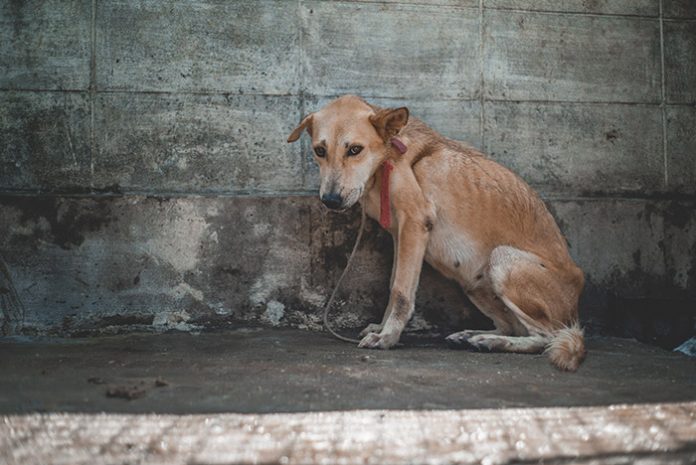 Worms in Dogs?Toxocara Canis or canine worm: The clinical picture of the disease depends on the number of parasites and the general health of the dog, but the disease is very insidious, and in most adult dogs it flows in a hidden stream.

There are almost no puppies that have not been infected with earthworms, but there are not a few adult dogs that have problems with these parasites. Worms are the most common parasites in the digestive tract of dogs, and the most common species is Toxocara Canis.

Worms in the body of a dog have multiple adverse effects. Adult parasites can completely block the intestines of the pancreatic ducts, damage the mucous membranes … which in turn leads to severe digestive disorders. And substances that are excreted by the parasite are also contributing to the overall impairment of health because they have a toxic effect on the dog.

As a result of parasitizing earthworms, weight loss, anemia, and the poisoning of the organism occur, and thus the weak and overall defense power of the dog’s organism erodes its immunity, making it exposed and vulnerable to all other infectious and non-communicable diseases.

It depends on the number of parasites, the age of the dog, and his general health. The disease, however, occurs in most adult dogs with a hidden course. The appetite is good, often increased, but the animal is thin. It can make strange dietary changes so that the dog eats grass or even its own feces.

In severe cases, mostly in puppies, the disease begins with the cessation of appetite, vomiting, and general malaise. Worms can sometimes be found in the recovered contents, as in feces. Puppies have a swollen belly. The leanness is pronounced, the muscles are underdeveloped, and the bones and rickets often bend.

RELATED ARTICLE:  14 Perfect ways to calm your dog during the thunderstorm!

In the last stage of the disease there is a disorder of the nervous system, often in the form of epileptic seizures, falls, cramps, muscle arrest, heavy and irregular gait. If the larvae pass through the liver and lungs, the inflammation of the liver occurs, which mostly goes unnoticed, except in extremely strong infections, that is, lungs, which is manifested by coughing, croaking, runny nose and fever.

The main source of infection is adult dogs and puppies for puppies.A dog becomes infected when it enters infectious eggs with food or water. In the intestines, larvae are released from the eggs, which penetrate the intestinal wall, enter the bloodstream and enter it into the liver.

From the liver, also through the bloodstream, they go to the lungs, from which they cough and with swallowed spit, they reach the intestine, where they mature into an adult parasite. This development takes about a month. Apart from this route, by mouth, there are two other ways of canine worm infection – fetal infection through the mother’s bloodstream and infections of newborn puppies via breast milk.

For all these reasons, veterinarians are reminded that prevention is paramount. It is essential that the living space around you and your pet is clean and tidy. This prevents the development of these parasites. And if your dog does get infected, therapy can be done with a spot-on Advocate that works on other intestinal nematodes. But don’t skip the vet’s advice.

Clean behind your dog

Adult earthworms live in the small intestine, and the infected animal secretes thousands of earthworm eggs daily by feces, thus contaminating the environment. However, a person cannot be infected by direct contact with a dog but must come in contact with old feces in which the earthworm eggs have reached sufficient maturity. Therefore, it is imperative that all owners clean the waste behind their dogs.

Adult parasites can develop only in the body of animals, but in humans, these larvae develop from these eggs in the gut, which then passes into the bloodstream and inhabit any organ or tissue. Most often, these are the brain, eyes, lungs, liver, and heart. Larvae can stay in our bodies for years because it is very difficult to diagnose.