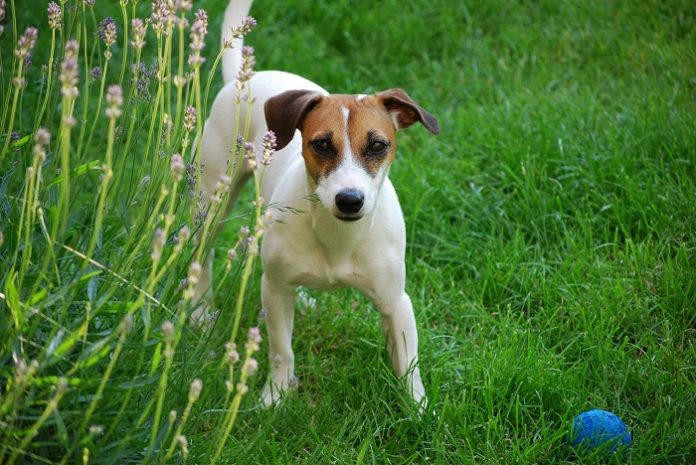 Jack Russell Terrier dog is a popular, friendly and smart little puppy who absolutely adores all kinds of activities. This English puppy was used for fox hunting and today is a sought after and adored family dog.

The appearance of the aforementioned dog is considered proportionate and does not have body parts that look larger or smaller than they should. This dog’s head is medium in size and straight. Its muzzle is long, while its jaw is wide and strong. Their lips are small and pigmented enough. Jack’s ears grow small and folded, and they are also very mobile. This dog’s eyes are dark and their shape is almond.

The neck of this dog is small and strong, and its loins are characterized by muscle. It has a deep chest. The tail of the dog is wider at the base and narrowing towards the top. Coupling with the said breed of dog is optional. The characteristic of the front legs is that they are strong and straight, while the back legs of the jack have grown strong and full of muscle. The dog’s paws are strong, round in shape, and have hard pads.

This dog’s hair will be different depending on what kind of jack it is. It may be longer or shorter, or it may be smooth or somewhat coarse. The undercoat of these dogs is thick and together with the cover coat allows the fur to become waterproof.

The characteristic of these dogs is that 60% of their body must be covered in white. Different patterns as well as markings are considered allowed and do not represent a deviation, and the shades of them vary from dark to light brown.

RELATED ARTICLE:  Laika : To the Stars and Beyond

Jack Russell Terrier dogs have a very cheerful character. Their liveliness encourages their activity, and accordingly most of their time they will be on the move. The said dog is also a feature of loyalty, as it is considered that they are very loyal to their owner.

They love to play and every type of activity you do with them will be a real pleasure for them. Jack Russell Terrier are fearless and brave dogs, and these traits are best demonstrated when hunting. They are very entertaining, so they are often in the spotlight and people consider them friendly dogs. When it comes to their relationship with children, we have to point out that they agree with them perfectly.

They are sensitive and gentle, so any game that is a little rough will not appeal to them, so it should be explained to the younger population that dogs do not play that way. In the company of other animals, they also get along well and are not jealous. The Jack Russell Terrier is a very agile and capable breed of dog. Thanks to their balanced temperament, as well as the different abilities that make them recognizable, these dogs are used in different fields today. They like to prove themselves, so they will do anything to prove that they can do the job.

It is necessary to socialize these dogs at their earliest by providing them with as much time as possible with other animals, especially dogs. If these dogs do not socialize at a given time, their innate desire to chase occurs, and accordingly, they become aggressive towards other animals.

It is very important that you carry out the process of socialization in the right way and at the appropriate time so that your dog lives in a harmonious relationship with your other pets if you own them. If you start the process of socialization later, when the dog is already grown up, it is very likely that you will not be able to carry out your idea all the way, as you intended.

The Jack Russell Terrier does not line much, so it is necessary to brush the dog twice during the week. They are not often bathed, but only a couple of times during the year, and therefore do not belong to the group of demanding dogs.

Jack Russell Terrier dogs are a group of very healthy dogs, who rarely get sick. However, if illness occurs, vision and hearing problems, or some type of allergy, most commonly occur.
Also, these dogs may suffer from hip dysplasia. If you take care of these dogs properly, you will provide them with long life and good health. It is imperative that you consult your veterinarian about any uncertainties and that dogs are vaccinated regularly.

These dogs should live with their owner in an apartment or house, and not alone in the yard. Because they are very energetic and active, they need physical activity, so it will be necessary to walk them every day or to let them play and exercise in the yard. If you have to travel somewhere, do not leave the dog alone as it could be destructive.

When it comes to the diet of the Jack Russell Terrier, it is essential that they feed on foods that are rich in vitamins, minerals, and proteins. To make sure your dog is getting enough vitamins, it’s best to give him industrially processed foods. If you feel it is better for you to prepare them, the foods that are competent for their diet are meat, different types of vegetables, eggs, fruits.

You can also feed them fish as well as cereals. Meals should be fresh and preferably warm. The water you give them must be fresh and clean.

Dogs are known to breed Jack Russell Terrier steam very easily and can be mated to other terriers as recommended. The female is given a forcing twice a year, but it is recommended that the first be skipped due to the health of the female.

Also, females over the age of eight should not be exposed to the mating process. The owners of the female Jack Russell Terrier are advised to consider whether they are able to take care of the young puppies responsibly because according to the data, this female can give birth to about one hundred puppies.

The Jack Russell Terrier breed originated in England at the beginning of the 19th century. They are named after the man of the same name, Jack Russell, who advocated their existence. The said man was a priest and very fond of these dogs. By crossing the Fox Terrier breed with certain domestic breeds of dogs, this breed was created. They were created as dogs to be used in hunting and in this field they managed well.

Namely, according to the data, these dogs did their best in fox hunting, because by their appearance they were chased from the burrow in which they were hiding, thus allowing the hunter to catch them as soon as possible. Their popularity began to increase over time, and accordingly they became highly sought after dogs.

When they noticed the talents of the Jack Russell race, humans created two species of the same in the 20th century. Now we have a dog that is taller but shorter, and another kind where the dog is very low and his body is longer.