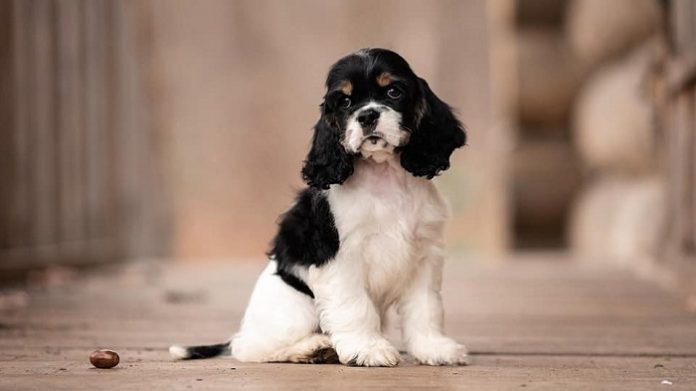 The American Cocker Spaniel is a dog breed, a spaniel type, native to the United States. Primarily intended for hunting small game, however, today in the vast majority of cases an excellent pet.

A beautiful spaniel with long, drooping ears, a rounded head, and abundant silk hair of medium length. The muzzle is wide and deep with a spacious jaw. The upper lip is drooping, covering the entire lower jaw. The teeth are strong and must have a scissor bite. The tip of the muzzle is always black on black dogs but may be brown on other dog colors.
The eyes are round and set so that they always have a view forward. The body is compact, with a short neck. The top line slowly falls down from the ridge to the root of the tail. The front legs are straight, well bony. The fifth toe (on the back of the foot, not touching the ground) should be removed.

The color of the fur can be pale dark yellow, black or in another monochromatic variant, then black with a tan (as in Dobermans and Rottweilers) and multicolored (white with black, white with brown or red, white with black and tan). The tail is docked at 2/5 of the original length, the dog wears it flush with his back and is constantly on the move. The Polish type of this breed has shorter fur due to hunting in the bush, and it also has a better hunting instinct. Both types of American Cocker Spaniels are great pets.

Always ready to work and play, the American Cocker Spaniel is just as good as a hunting dog and as a pet. Cheerful and sensitive dog, a great friend of children always respecting the owner’s authority. Cute, gentle, and cheerful, which is shown by the constant waving of the tail. The intelligence of the American cocker is average. Although he is a lively and playful dog, it is necessary to socialize him in order to avoid shyness and withdrawal. Cockers love people and need them to be happy. Sometimes it is difficult to teach them house rules, including barking at home.

In any case, most of them are easily trained and most get along well with other animals. As this is a very popular breed in the world, there is a great demand for this breed, which creates the possibility of a bad upbringing process due to the desire for as much and better earnings. In these cases, individuals with a bad character and mood swings appear, which in combination with shyness, fear and domination create a very evil dog. In such cases, aggressive guarding of things, people, places, then hypersexuality and running away from home is possible.

The biggest problem with American cockers is cataracts, glaucoma, and knee sprains. Minor or less common problems are hip dysplasia, ectropion and entropion of the eye, various allergies, seborrhea, and the like. Lately, however, IMHA (Immune-Mediated Hemolytic Anemia), almost always deadly, without any signs, known as the silent killer, has appeared quite rarely.

Exercises and walks: 60 – 80 minutes, daily. The American Cocker enjoys going out, but will still be happier in a city with a reduced range of motion. They like to swim, supply, and play any similar games with the family. They do not enjoy games that involve a little more rudeness, so it is necessary to pay attention to small children when playing with them.

The fur of the American Cocker Spaniel should be brushed and combed regularly so that it is not tangled. You should wear it to a professional haircut every two to three months for the fur to be good and tidy. Rub the excess hair into the ears and paws. Wipe the parts under the eyes often because the eyes have tears. American cocker spaniels are mutated on average. These dogs will live comfortably if they move and train enough.

The American Cocker Spaniel has a very good appetite, so if given a chance, it will eat a lot. He has an exceptional skill to try to enchant you with his big, brown eyes, begging for more little food. But, don’t give in – being overweight with a cocker is not good for his health at all.

How much an adult dog eats depends on his age, metabolism, size, and activity levels. Like humans, dogs are individuals for themselves. It is logical that a dog that is more active will receive a different type of food than a dog that stays up all day. Inquire which granulated food is best for a cocker spaniel.

Keep and maintain his good weight by measuring food and never leave him a full bowl throughout the day. If you can see the dog’s ribs, he is malnourished, and if the ribs are not visible, but you can feel them by touch without pressure, the dog has a normal weight. If there are layers of fat around the ribs, your dog needs to go on a diet.

RELATED ARTICLE:  Story of Capitan : The dog that guarded his master’s grave

The first American Cocker Spaniels arrived in America together with the first settlers on the ship Mayflower in 1620. The American Cocker Spaniel was obtained from the English Cocker in the 19th century for the supply of quail and snipe. The original separation from English Cockers was based on size, but in the following years, the difference grew due to the fact that different traits were forced in both breeds.

By the 1840s, the American Cocker Spaniel was so different from the English that in 1945 it was impossible to judge them together at an exhibition. After this, these two races were separated and recognized with special standards. As this breed was bred for hunting, it still possesses hunting instincts, so it is possible to see them as working dogs, but very rarely.