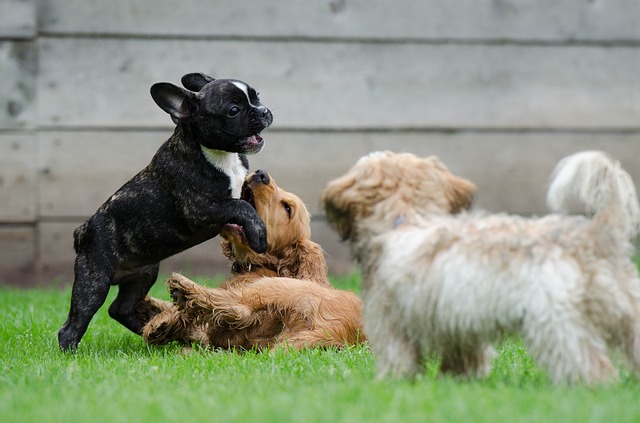 One of the most common dilemmas for dog owners is whether fenced dog parks are a good place to socialize their pets with other dogs.

We know that it is easier to let the puppy go and see how it will cope, because we start from the fact that no dog will attack the puppy. This kind of thinking, however, is completely wrong, because not all puppies are the same and not all dogs play the same. Some dogs like rougher play and some puppy may like it, but some will not like it, so they will tuck their ears and tail, bow down, the owner will constantly lift it in their arms and there will be frustration and irritation, when barking may occur, and even an attack on another dog is possible.

We believe that you do not want to traumatize your puppy when socializing and meeting other dogs. Having said that, we are absolutely sure that your puppy will show all the school examples of stress signals, while adult dogs can sometimes skip it and go into conflict.

Keep in mind not to expose your puppy to other dogs that are not well socialized. Avoid exposing your pet to these situations, because your pet will pick up negative experiences from that encounter, and later you will have big problems with him.

RELATED ARTICLE:  Everything You Need to Know About Sleep Disorders in Dogs

While your dog is a puppy, it is not advisable to take him to a dog park and let him run around without control. For a start, he may fall into a not-so-good socialized society from which he can draw a negative experience. This is almost always a mistake for new dog owners in dog parks. In addition, you need to make sure that he is in the company of healthy dogs that have been vaccinated so that he does not become infected.

When meeting another dog, pay attention to the body language of both dogs. If they sniff and wag their tails, chances are high that they will play and reward and encourage such behaviour. Also, if both dogs land on their front legs that are outstretched, while their hind legs are raised, that is a clear sign of an invitation to play. To better understand your puppy, you should understand his body language. When your dog feels stressed or uncomfortable in a certain situation, he will warn you.

Unfortunately, most owners do not recognize the signs of stress in their dog and ignore them, and later they grow into a big problem, since the owners do not remove the puppies from these stressful situations. Watch your puppy carefully in any new situation and never ignore the stress signals they send us. Some of the stress signals are yawning, showing teeth, ruffled hair… It is important that you never hit or punish a dog in such situations because if you turn off these ways of them telling you non-verbally, they may simply skip this step and become aggressive or timid.

At the entrance to each dog park there is a prominent list of rules of conduct, which is made for the safety of dogs and you as their owners. The basic rules of conduct in dog parks are:

– The dog must be under the constant control of the owner or guide;
– Owners are responsible for any injury, damage caused to other dogs and people by their dogs;
– All dogs that show the first signs of aggression must be removed from the park. Dogs with such characteristics must carry a basket. Also, dogs like this should not be introduced to the park if there is anyone in it;
– It is forbidden to enter: pregnant females, females in forcing, sick and injured dogs;
– Do not introduce puppies younger than four months and puppies that have not been vaccinated;
– Children under the age of eight are prohibited from entering;
– Pick up the waste made by the dog, as well as any other waste (cigarette butts, wrappers, papers…);
– All dogs must be healthy, chipped and vaccinated against infectious diseases;
– Do not ingest food. This primarily refers to food for humans, but our advice is to never eat dog food. Some dogs may have trouble storing resources (food) and then may endanger your pet’s life. Always start from the assumption that not all dogs are like your dog. Each dog is an individual in itself and the dog’s behaviour itself is unique and complex;
– It is not allowed to bring alcoholic beverages into the park;
– The park cannot be used for spontaneous social gatherings and dog training.
Since fenced dog parks do not exist in all parts of the city, many dog ​​owners use public green areas to recreate with their pets. We hope that the number of fenced parks will increase in the near future, but in the meantime, do not forget that the rules of dog etiquette must be applied everywhere for the safety of your pets, people around you, and you as the owner.