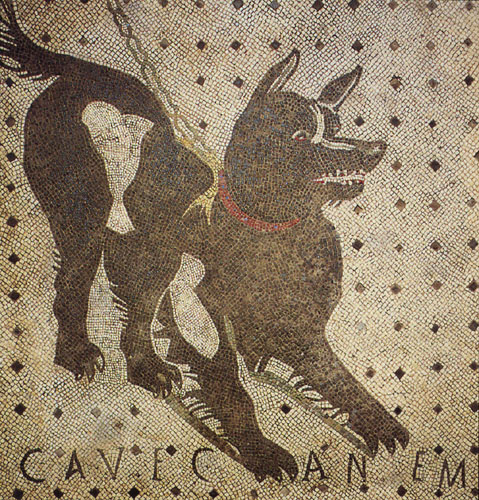 Dogs have been friends, protectors and helpers of people for thousands of years, so it is not surprising that the ancient Romans often bred and used them for various purposes. It is very interesting fact that the oldest inscription ‘Beware of the dog’ have been found in the Italian, Pompeii.

Just as is the case today, a huge number of people have taken dogs as pets and protectors of property. Because of that, there were frequent cases where dogs attacked random passers-by who would pass by nearby houses.

That’s why the Romans introduced the law of notification that you had to set up if you had a dog. This is how the inscription “Cave Canem” was created in Pompeii, which today translates to “Beware of the dog“. The oldest such sign was found in Pompeii in the form of a mosaic and was made in the second century BC.

The fate of Pompeii was catastrophic and is probably known to everyone because, after the eruption of the nearby volcano Vesuvius, the entire city was petrified. The stone remains of houses and people can still be seen in Pompeii today, as well as this “Cave Canem” sign that lets us know that dogs have been our protectors since ancient times.

RELATED ARTICLE:  Story of Capitan : The dog that guarded his master’s grave