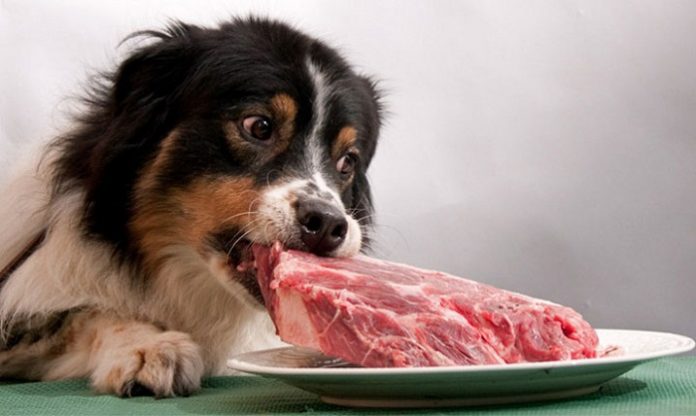 The “Raw” diet for dogs is not as healthy as you might think . We all know that the wild relatives of our dogs, the wolves feast of raw meat, but do you think it is a good idea to put your dog on this so-called “Raw” diet?

A new study is showing that giving your dog raw flesh carries risk of exposure to parasites and bacteria.More important, a dog’s raw diet can be dangerous for humans too.
Pets foods that are made from raw meat or raw meat by-products such as meaty bones or organs have been found to include parasites (tapeworms and toxoplasma) as well as Escherichia coli, Listeria monocytogenes, Brucella suis and salmonella, according to a study that was recently performed in the Netherlands.

If this pathogens found their way into homes through contaminated dog food, there is a big possibility that they could also sicken people. Owners who choose to feed their dogs with raw meat –based diet may thing that they are choosing the healthier and more natural food, but in fact there is no study that shows that this diet provides the dog organism with any benefits.

Raw meat-based diet is linked to gastroenteritis and diarrhea in dogs, according to this study.Past findings also note that raw meat-based diet lacks important nutrients, which can lead to health problems – particularly with young puppies.

The diet have contributed to dogs developing hyperthyroidism and have even resulted in fractured teeth and gut perforations.The public survey shows that as many as 1 million Dutch households are putting their dogs on a diet that includes raw meat or raw by-products.
To see which microorganisms may lurk in the food, testing has been performed on 35 products that contain different types of raw meat, including chicken, beef, lamb, duck, turkey and rabbit meat.

Traces of E. coli has been found in 86% of the products, while 54% included L. monocytogenes and around 20% held salmonella. In 29% of the samples, parasite DNA was detected.The microbial evidence that has been gathered from the tested samples is lower that the acceptable limits for commercially produced pet food in the Netherlands.

What is more shocking, the amount of E. coli in 40% of the raw meat-based diet products exceed the threshold for safe human handling, which means that a person could become infected with the bacteria through physical contact with the pet food or with the contaminated surfaces.The salmonella species analyzed in the research presented another shocking surprise – they were antibiotics resistant, which could make infections difficult to treat.