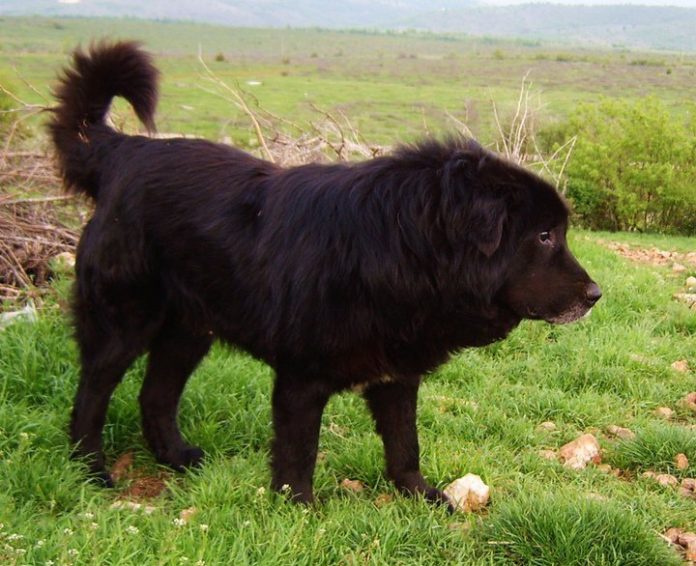 Since the Neolithic period, the Macedonian Shepherd Dog – Karaman has been present at the stock-breeding settlement and since that time it was kept as herd guardian on the region of Macedonia (from Epirus to Shar-Planina and from Thessaloniki to Pirin.)

The Macedonian Shepherd Dog – Karaman is an autochthonous dog breed from Macedonia and if we go back in the earliest records about this dog, we could see that its importance and influence was so great that it found it’s way to ancient coins, vases, mosaics, and sculptures or even the records of the historians and poets. Dating for the medieval times,  there are various artworks in many Macedonian churches and monasteries.

During the 19th century, the Karaman was subject to numerous epic fork poems.
The dog itself is a unique moloss-type which was bred by the Moloss tribe from Epirus (Olympias – mother of Alexander the Great is a direct descendant of this tribe) and because of this, the dog has been of great value and respect in the ancient world. 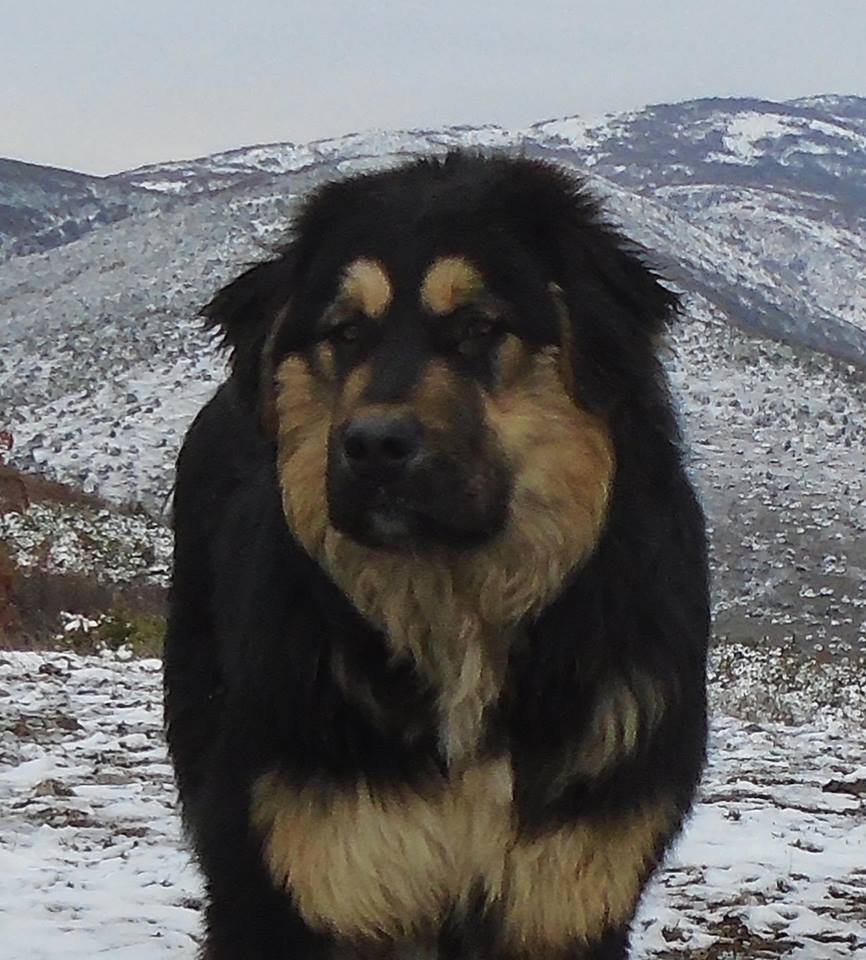 In it’s the purest form, Karaman was kept by the Miaks and the Vlachs, because of their conservative and nomadic way of life, so the dog was in constant movement from summer to winter pastures. Exceptional courage and loyalty are the greatest values to this dog, so today it could be usually meet as a sheep flock guardian, but also as a protector of people and properties.

The dog itself got a firm and compact constitution and with a strong appearance and proportions of its body and has great mobility. The difference between the male and the female dog is very obvious. Males are much bigger and more massive, quite robust with a wide head while the females are smaller but with a more elegant constitution than the males. This breed is very distrustful towards strangers and they always approach strangers with controlled aggression, which they expressed only when it is quite necessary.

Karaman’s barking is strong, deep and sharp. It usually binds itself to one person and loyalty is the strongest characteristic that this dog has. Also, the average height of the males is around 70 cm. and the females stand at 64 cm. There is no upper limit for the breed because taller dogs are more desirable. The lowest height of male dogs is 65 cm. and the females are approximately 60 cm. tall. The average weight of the adult males in good working conditions is about 50 kg while the weight of an adult working condition female is 45 kg. 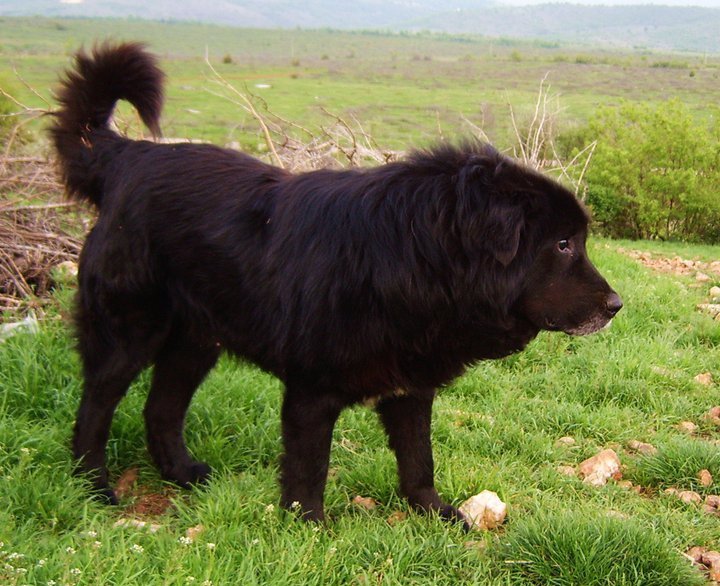 As we mentioned before, this dog breed was present in the Macedonia region since ancient times. But, with the migration of the people from the villages into bigger cities after World War II, this breed has become almost extinct.

When the Republic of Macedonian gain independence from Yugoslavia there was a need for a dog breed which will become a national dog breed. Although it is not an official dog breed yet, the Macedonian Shepherd – Karaman is quite popular amongst the people in Macedonia.

At the end of the 20th century, there were around 50 dogs left, but with the project lead by the brothers Marjan and Vlatko Kostovski, this dog breed was resurrected. In 2004, the brothers Kostovski is publishing the book “ Macedonian Shepherd Dog-Karaman” and in 2013 the book “Karaman – Mythical Dogs of the Ancient Macedonians” was published and the standard for the dog breed was precisely described. By conducting research, there are many discoveries about the dog breed found not only in Macedonian but also in the world’s history, mythology, heraldic, anthropology, and cynology.

By some of those researches, conducted by the brothers Kostovski, we can see that the Karaman was a mythical dog of the Ancient Macedonians and it found it’s placed on some of the earliest national emblems. With research and analysis of the Macedonian folklore, there has been a discovery that the Karaman is Sarama from Rig Veda.

After careful analysis and comparing of the verses in the Rig Veda’s hymns and the verses from the Macedonian songs created by the ethnical Macedonian shepherds, the result is that it is the same mythical story that didn’t go thru major changes in 3300 years. The biggest similarity that is notable in both of the poems is that while the Macedonian shepherds are singing about Chelnik Pejo and his Karaman dogs, the Rig Veda’s verses are about the Hindu God Indra and his canine companion Sarama. 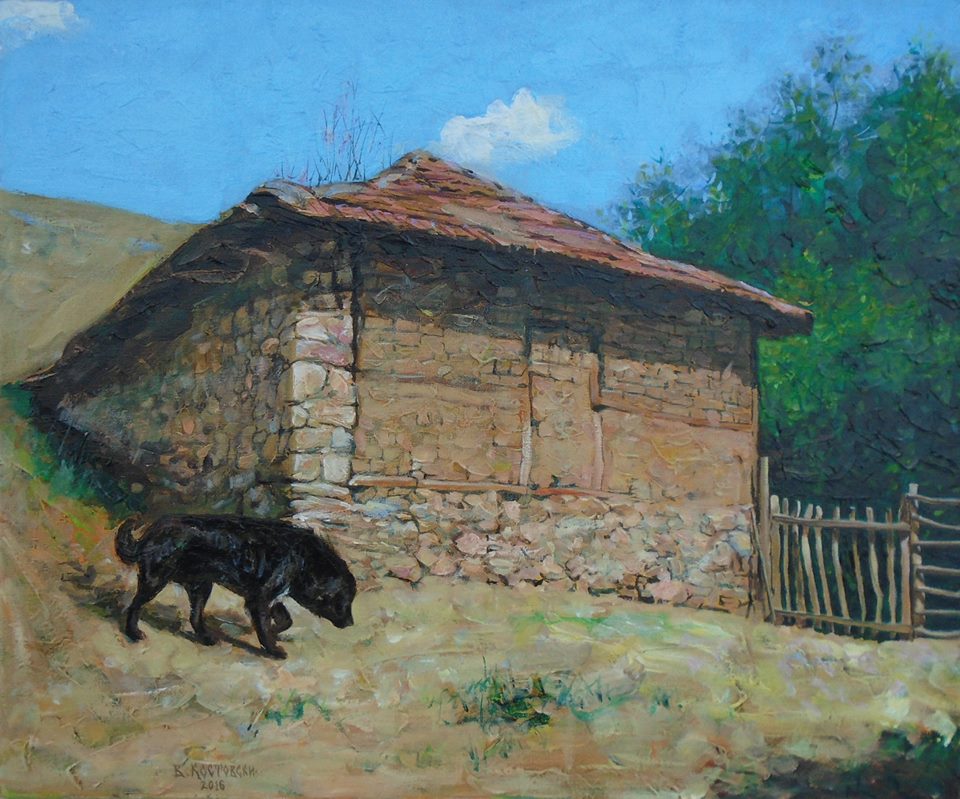 In both cases, the main subject is the theft of a flock, but the difference is that while the Macedonians are blaming the Turks for the theft, the Rig Veda’s hymns have mentioned for the demonic tribe of Pani. With the expansion and spreading of Christianity in the Macedonian region, the pre-Christian version of the story about this dog faded away. The whole story gained a more realistic approach. While researching the mythical subject of the Karaman dog, the brothers Kostovski came across the fascinating discovery.

The Arian tribe that in the late Bronze age conquered parts of Northern India and sang the hymns about Indra and Sarama are originating from the Macedonian region. In the book “Karaman – Mythical Dogs of the Ancient Macedonian” a solution for the enigma that has been bothering many of the world’s most famous historians and archeologist was offered – Macedonian region was the native land of the Arian tribe.

There are many indications that are showing the proof about two invading waves from Macedonian to Northern India. The first wave of invasion was lead by Dionysus in 2000 B.C and the second one was lead by Heracles in 1350 B.C. When Alexander the Great was going towards India, on its way there he has been approached by many people stating that they are descendants of the soldiers of both Dionysus and Heracles.

In their analysis of the Rig Veda, the brothers Kostovski are showing that the Macedonian Shepherd Dog – Karaman, existed in the Macedonian region for more than 3300 years, and it is one of the oldest dog breeds in the world. In the tenth hymn of the Rig Veda, the Saramei – black four-eye dogs are mentioned. They have the role of canine companion of the God of Death – Yama, while in the Macedonian mythology the Karaman is connected with the afterlife and they have the power to destroy the undead (vampires).

RELATED ARTICLE:  5 Signs That Your Dog Needs To Go To The Toilet! 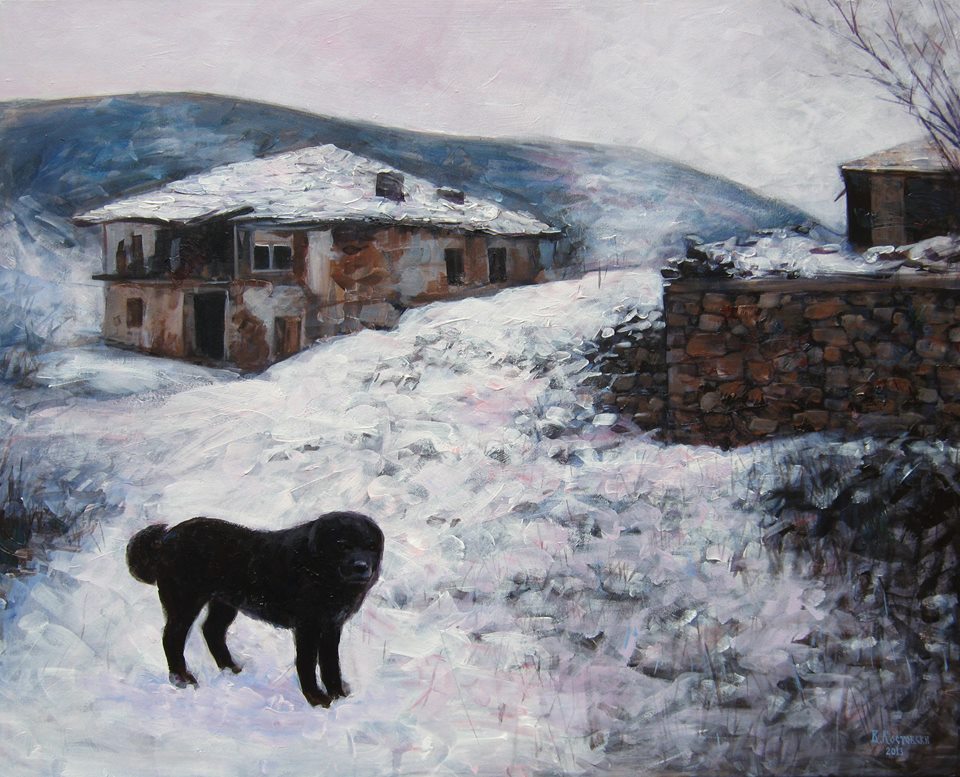 On the geographical map of Macedonian from 1692, made by the Franciscan cartographer Vicenzo Coronelli, above the city of Billazora (today Veles) are drawn two Macedonian coat of arms. On the first one, there is a black dog and on the second one, there are bull horns with mace between them.

Above this coat of arms, Coronelli explained that the first coat of arms (the one with the dog) was a Macedonian national emblem before Alexander the Great while the second one, was a national emblem after Alexander the Great. According to the heraldic rules, on the first coat of arms – the Macedonian Shepherd  Dog – Karaman is shown, while on the other are shown the attributes of the god Indra (who was shown in the Rig Veda as a bull-like creature with mace as his weapon).

To find out more about this dog breed, please view the exclusive interview with the President of the Official Macedonian Shepherd Dog – Karaman Kennel Club – Mr. Ilija Karov. Watch the video below.

The Official Macedonian Shepherd Dog – Karaman Kennel Club was found in 2004 with only one mission – to keep the Karaman from extinction. Throughout the year there are many events and dog shows organized by this kennel club to promote and present this exceptional dog breed closer to the general audience.

DogTrophy.com attended the specialized dog show for the Macedonian Shepherd Dog, held in the capital of Macedonia, Skopje, where more than 100 dogs presented to the audience. The big number of visitors and exhibitors were eager to find out more about this dog breed and it was a feast for the eyes to see these dogs in person. The great news is that the younger audience is showing great interest in these dogs.

We are presenting to you this gallery with some of the most memorable photos from the IX National Macedonian Shepherd Dog – Karaman Dog Show.

DogTrophy.com was awarded a certificate of gratitude by the Macedonian Shepherd Dog – Karaman Kennel Club for presenting and promoting this dog breed. 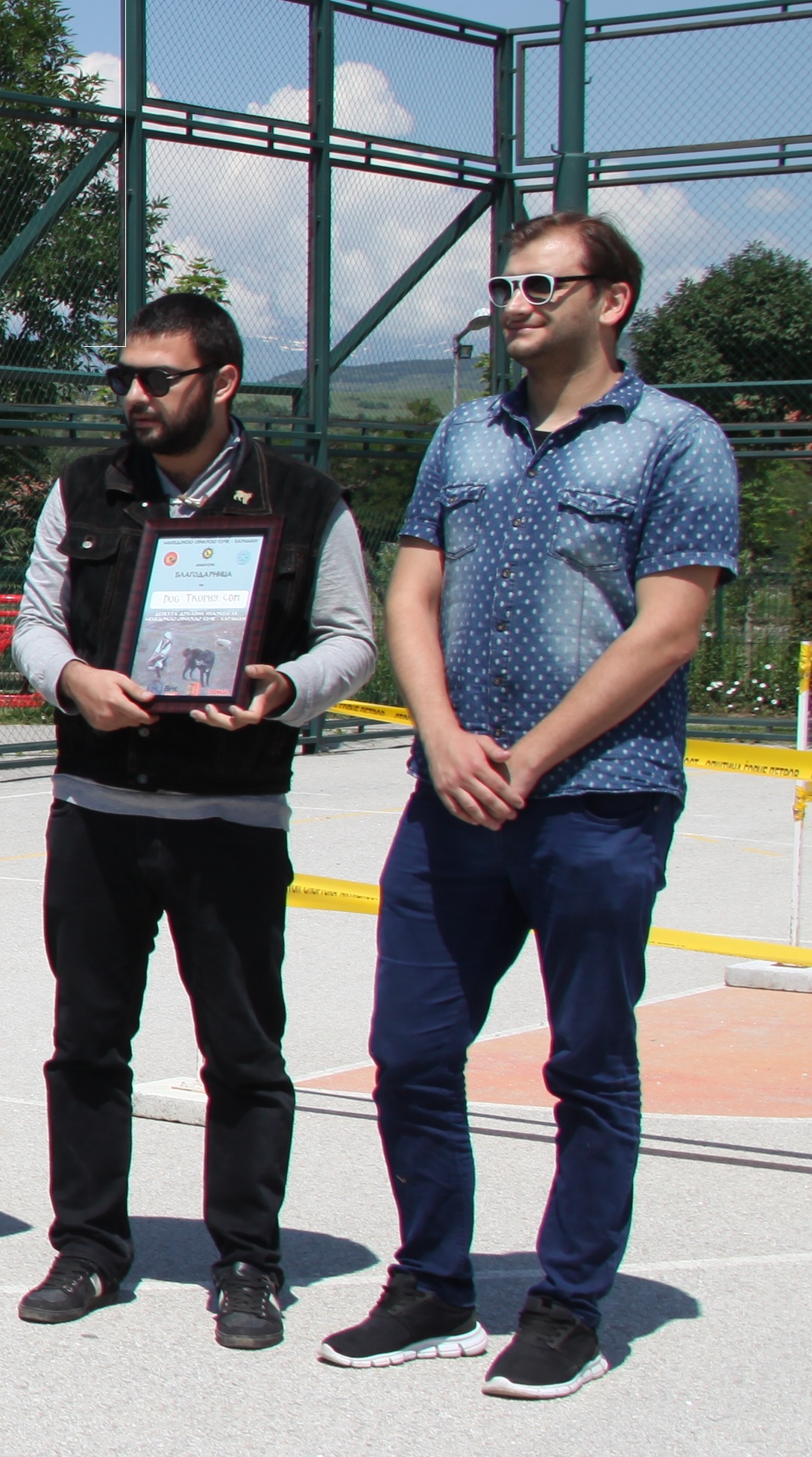