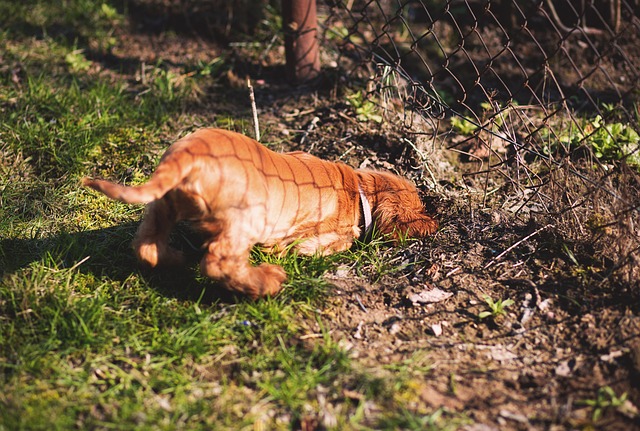 Your dog digging holes ? If you see holes in the yard it can be a message to you that your dog is afraid of something, that he is missing some mineral, that he wants to reach the female in the forcing. Females, on the other hand, dig holes before braking.

Dogs like our pets often have some behaviors that are strange to humans, to say the least. Sometimes they stop suddenly, it seems to us for no reason, and they don’t want to leave for a long time, or they listen to the surroundings with great attention for a few minutes, and sometimes they start barking, again by our standards for no particular reason. First, we must know that their world looks completely different from ours and that what we are usually not aware of is important to them.

Perhaps one of the strangest habits is digging holes. Most owners are not aware of why a dog digs holes in its surroundings, but sometimes there are justified reasons for that.

One of the most common reasons is to try to escape from the environment in which the dog is. Then the dogs usually dig holes near the fence or in places that are convenient to escape. This also happens when there is a female in the vicinity who is being chased, so due to the love call, the males dig holes to reach her. Dogs will very often dig holes if they feel there is another animal under the ground. Hunting dogs very often obsessively dig holes in their environment, out of the habit they have acquired in hunting (caves).

Digging holes out of fear is one of the reasons when a dog obsessively digs a hole he wants to hide in. This fear can be caused by some noise in the environment (construction site, stadiums, fireworks) or by the desire to get away from some negative influence from the environment – such as a storm. We can notice that dogs even a few hours before the coming storm start digging a hole in which they can take shelter. Also, this phenomenon is present during the summer, at high heat, and serves to keep the dog cool.

Dog dig holes due to eating disorders, but also when they lack some minerals. Here they can unmistakably find what their body lacks nutritionally. This urge should not be prevented, although it can also be associated with a disorder called pico and the appearance of a perverted appetite (when a dog eats inedible things).

Digging holes for the purpose of hiding food is also one of the completely normal phenomena in the dog world. In this way, dogs remove excess food that they cannot eat. So, they save food for days when they may not be there, and, regardless of the abundance of food they may be surrounded by, this instinct should not be prevented in any way because it has helped them survive in nature.

At the same time, the dog will never bury an easily perishable part of the food, for example, the entrails, but only bones or meat that can survive for a relatively long time underground and without oxygen.

Another case when digging holes is a normal occurrence is a in females that are about to mow. They dig holes, so that, they can be damaged in peace, and so that the puppies are protected from natural phenomena, but also from possible predators that can endanger the litter.

RELATED ARTICLE:  Is Your Dog Afraid of the Vet? Read This What to Do

Of course, every owner should be aware that digging holes is a normal occurrence before trying to wean their dog from the habit of digging. According to some research, more than 80 percent of dogs have this habit, which is part of their instinct and way of surviving in the wild.

First, we should try to understand the cause and reasons for digging holes, because sometimes our pets send us information that they are afraid of something, that they are preparing for something or that they lack something in the body (minerals, vitamins). These conclusions lead us to the conclusion that in most cases, such phenomena should not be prevented, but their causes should be discovered in time, or a veterinarian should be visited to check whether there is a health-justified reason for such behavior.