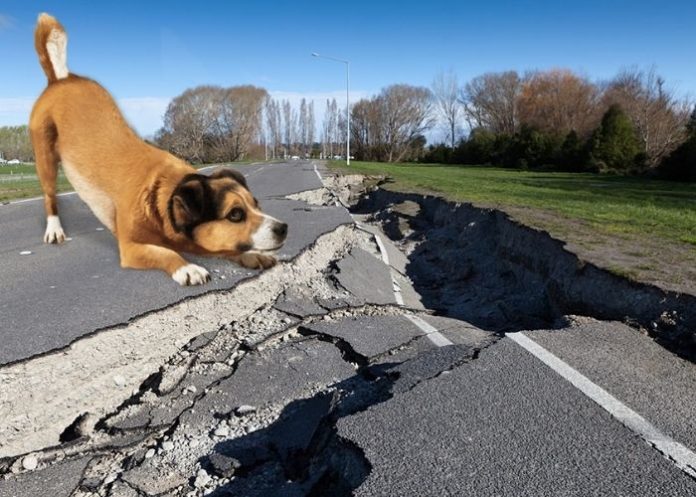 If you live in an area where earthquakes are common and you have a dog, you have probably noticed that the dog reacts strangely before the earthquake happens. This situation has developed a lot of questions in the community of dog owners, most importantly, “Can dogs feel earthquakes?”

There is no doubt that dogs feel something before us. Is it some superhuman ability, or are they simply their sharpened senses? Dogs have abilities that are really close to superhuman. Yet science can claim that there is nothing superhuman in the behaviour of our furry friend before the earthquake. Here are a few things that could help to clarify things.

Are dogs capable to sense earthquakes?

The first question would be, “Can dogs feel earthquakes?” Yes, dogs are capable to feel earthquakes. Dogs can feel earthquakes just like us. They will feel the ground tremble and hear the horrible noise that comes with the tremor. Dogs can be quite frightened, and if you live in an earthquake-prone area, you should know how to calm your dog down.

Can I feel the upcoming earthquake?

The more important question is whether dogs can really sense when an earthquake will occur. It is better to say, that dogs can not feel the upcoming earthquakes, as far as we could tell.

Dogs have some senses that are much better than ours. The sense of smell of bloodsuckers is at least 1000 times stronger than ours. Dogs can smell things we are simply not equipped for. Dog’s eyesight is weaker than ours. We can see more colours, but they see better than we do at night. The sense of hearing is more important and allows dogs to detect or feel earthquakes before us.

RELATED ARTICLE:  Oxytocin : The Hormone of Love and Happiness

This is the main reason why dogs can feel the earthquake before us. That does not mean dogs can hear them when everything starts to shake. This actually means that dogs before us will hear the rumble coming before the earthquake. That should not be too surprising because their hearing is better than ours.

Dogs can hear 47,000 – 65,000 Hz, and adults can only hear sounds up to 20,000 Hz. However, the main difference is the sensitivity of the ear. Dogs can hear sounds far easier and quieter, which means they can hear earthquakes before us. Since that sound is not something they are familiar with, they will start to panic.

Another possible explanation for why dogs feel earthquakes before us is that they feel P waves. When an earthquake occurs, it sends two types of waves – P waves and S waves. P waves are first, and they are shorter and much harder to detect than S waves. S waves are the ones that cause the tremendous shaking of the ground we feel.

Are dogs capable to prejudice when an earthquake will happen?

There is real scientific and anecdotal evidence to support the theory that dogs can sense that an earthquake will occur. However, there is no way I can tell us that. Various reasons can cause anxiety in dogs, and they can happen much more often than earthquakes.

Our best chance is to really get to know our dog. If you know how your dog usually behaves and what could cause his anxiety, you may be able to predict that something bad will happen. However, you can learn this by studying your dog’s body language and signs. This is very individual, and some owners might do it better than others. An earthquake would probably be one of the last things they would think about.