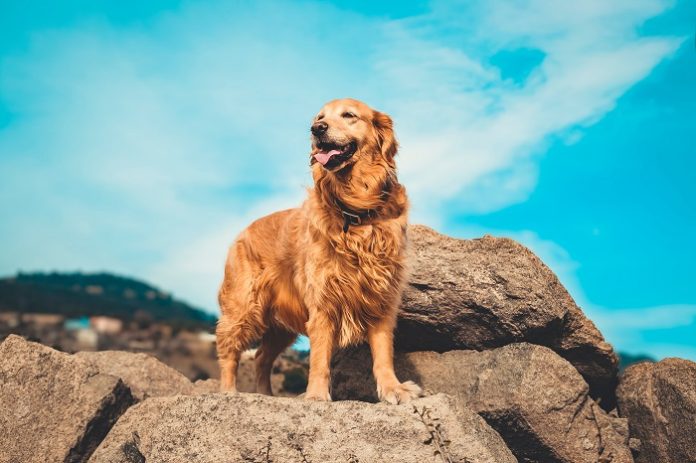 Prior to the discovery of Lord Tweedmouth‘s pedigree books in 1952, the breed was thought to be descended from dogs from a Russian circus troupe whose performance Lord Tweedmouth saw in Brighton in 1858. These dogs were thought to be about 30 inches tall at the shoulders with thick, wavy hair, different colours from cream to biscuit color. It is said that Lord Tweedmouth was so impressed with their intelligence, appearance and obedience that he ordered 8 dogs from them and transported them to his property in Guisachan, Scotland, where they were used to track deer.

However, the Sixth Earl of Ilchester, the great nephew of Lord Tweedmouth, abandoned Russian theory in 1952, basing his evidence on a genealogical book kept since 1835 in which all Guisachan dogs were listed and in which Russian dogs were not even mentioned. Nous, who was always thought to be one of the dogs from the Russian circus troupe, was enrolled, writes Lord Chichester‘s breeding in June 1864, ordered in Brighton. Lord Tweedmouth‘s grandson explained that his grandfather bought his first yellow dog from a shoemaker in Brighton, who said it was a yellow puppy from a litter of black wavy-haired retrievers, given to him as a debt repayment. That puppy was -Nous-

After the first mating in 1868 until the last 1889, some of his puppies were kept, some were given to guardians on neighbouring estates, and others to friends and relatives in England and Scotland, according to which the first kennels were established.

The first Golden Retrievers were shown in 1908. They belonged to Viscount Harcourt who started the Culham line with dogs from the Earl of Portsmouth. They were shown at Krafts and the Crystal Palace, although at the time they were not officially recognized as a special breed of retriever. In 1906, Mrs. Carlsworth acquired her first retriever, a female puppy without a pedigree, whom she named Normanby Beauty. She has proven to be a highly intelligent and tireless working dog. In 1908 she was mated to Culham Brass and in 1909 she joined Lord Harcourt as the only exhibitor of yellow retrievers in 1909, although she was not yet a separately classified breed, eight Gold appeared on Krafts, and in 1910 as many as ten.

At the beginning of the 19th century, the hunting became very popular in England and Scotland, and it was both a sport and a practical way to provide food. Retrievers became a favourite because there was a tendency to breed a medium-sized dog that would hunt wild feathered game both in the water and on land.

During the 19th century, the guardians of the hunting grounds in Guisachan, the estate of Lord Tweedmouth of Inverness Shire in Scotland, set a record in the development of Golden Retrievers. Lord Tweedmouth bought the first Golden Retriever in the mid-19th century. The location of his property was on the Tweed River, which was directly related to the program of the Lord to produce the characteristics of his yellow retrievers. Along the banks of his river were Tweed light-coloured water spaniels. It was a specific type of spaniel that was used for making, known for its intelligence, courage and ability. The Tweed Water Spaniel had a huge impact on Tweedmouth’s breed development as he mated his first male Nousse with the Bell Tweed Water Spaniel and got four yellow puppies.

The most popular asked questions about the Golden Retriever!