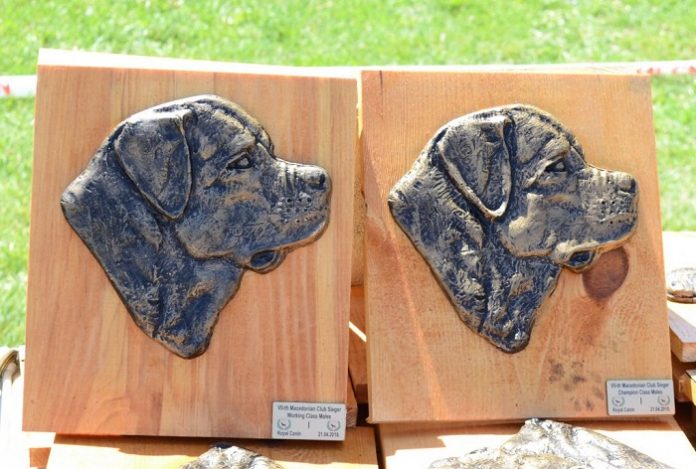 Rottweilers descend from the Molossus, a mastiff-type dog. Their ancestors marched to Germany with the Romans, driving the cattle that sustained them as they conquered the known world. As the army traveled, the big dogs mated with dogs

that were native to the areas they passed through and laid the foundation for new breeds. One of the areas through which they passed was southern Germany, where the Romans set up colonies to take advantage of climate and soil, which were suitable for agriculture. They built villas roofed with red tile. More than 600 years later, as they were building a new church, inhabitants of the town excavated the site of the ancient Roman baths and uncovered one of the red-tiled villas. The discovery inspired a new name for the town: das Rote Wil (the red tile).

Over the centuries, Rottweilers flourished as a market area for cattle, the German equivalent of a Texas cowtown, and the descendants of the Roman Molossus dogs drove the cattle to town for butchering. To keep their money safe from thieves after selling their livestock, the cattlemen put their filled purses around their Rottweiler’s neck when they returned home. Butchers in the area also used the dogs to pull carts loaded with meat. Eventually, rail transport replaced cattle drives. The Rottweiler nearly became extinct. 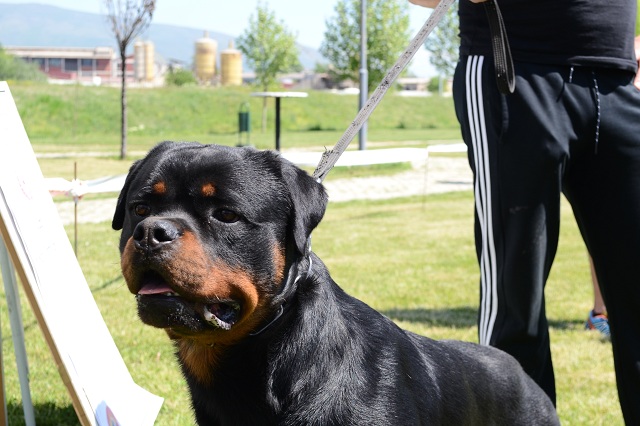 At a dog show in Heilbronn, Germany, in 1882, only one nondescript Rottweiler was exhibited. That situation began to change in 1901, when the Rottweiler and Leonberger Club was founded and the first Rottweiler breed standard was written. The description of the Rottweiler’s appearance and character has changed little since then. Rottweilers began to be used in police work, for which they were well suited.

Several Rottweiler breed clubs were formed over the years, but the one with staying power was the Allgemeiner Deutscher Rottweiler Klub (ADRK), founded in 1921. The ADRK survived World War II and has continued to promote good breeding programs in Germany and throughout the world.

It’s dedicated to preserving the working ability of the Rottweiler. It’s thought that the first Rottweiler came to the U.S. with a German emigrant in the late 1920s. The first litter was whelped in 1930, and the first dog registered by the American Kennel Club was Stina v Felsenmeer in 1931. After World War II, the breed started becoming more popular. At that time, it was primarily known as an excellent obedience dog. 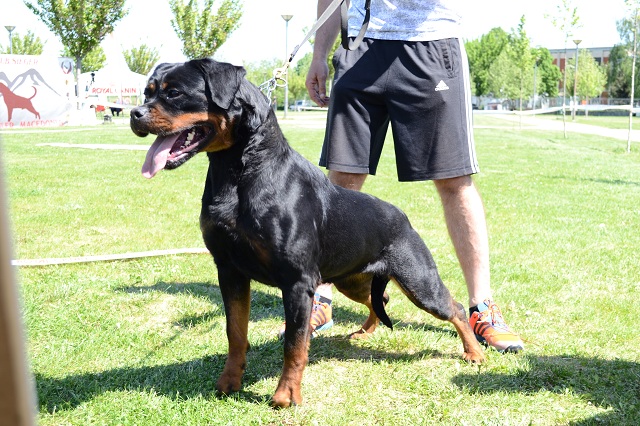 The height of the Rottweiler’s popularity was in the mid-1990s when more than 100,000 were registered with the American Kennel Club. Being popular isn’t necessarily a good thing when you’re a dog. It’s not unusual for irresponsible breeders and puppy mills to try to cash in on the popularity of a breed and start producing puppies without regard for health and temperament problems.

This is what happened to the Rottweiler breed until bad publicity and the demand for them decreased. Dedicated, reputable breeders are taking this chance to turn the breed around and ensure that Rottweilers are the type of dogs they were meant to be. Today, Rottweilers rank 17th among the 155 breeds and varieties registered by the AKC. 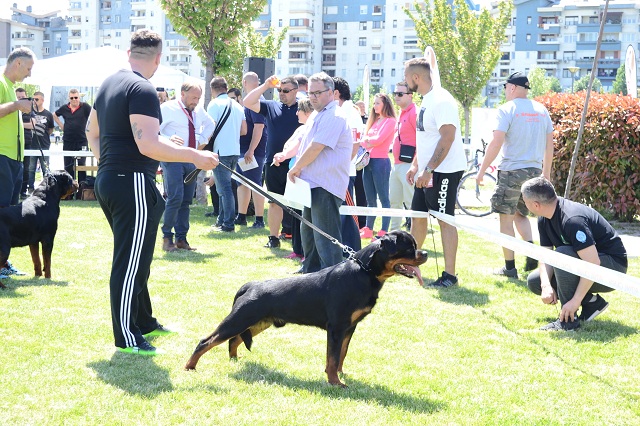 Like the mythical Greek hero Hercules, the Rottweiler is strong and true with a loving heart. Affectionately called Rotties or Rotts, the breed originated in Germany, where it was used to drive cattle and pull carts for farmers and butchers. That heritage is reflected in the Rottie’s broad chest and heavily muscled body. When he moves, he displays strength and stamina, but when you look into his eyes you see warm, dark-brown pools reflecting a mellow, intelligent, alert, and fearless expression.

A well-bred Rottweiler is calm and confident. He’s typically aloof toward strangers, but never timid or fearful. Rottweilers exhibit a “wait-and-see” attitude when confronted with new people and situations. When these characteristics come together as they should, the Rottweiler is a natural guard dog with a mellow disposition who is successful not only in police, military, and customs work, but also as a family friend and protector. 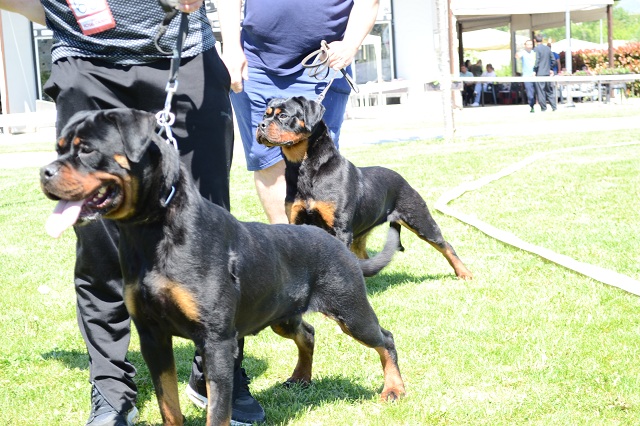 Rotties have a natural instinct to protect their families and can be ferocious in their defense. It’s essential to channel their power and protectiveness by providing early socialization, firm, fair, consistent training and leadership, and a regular job to perform. When this doesn’t happen, Rottweilers can become dangerous bullies rather than the companionable guardians they’re meant to be. Rottweilers walk a fine line between protectiveness and aggressiveness. If they aren’t carefully bred for a calm, intelligent temperament and properly socialized and trained, they can become overly protective.

That might sound like what you want, but a Rottie who lacks the ability to discriminate is dangerous to everyone he encounters, not just the bad guys. You must be able to provide your Rottweiler with leadership he can trust and respect without resorting to anger or physical force. Otherwise, he’ll take the role of top dog for himself. With a dog as powerful and intelligent as the Rottweiler, this is a recipe for disaster. Despite what you might have heard, Rottweilers are not temperamentally unsound or inherently vicious. Well-bred, well-socialized Rotties are playful, gentle, and loving to their families.

They are easy to train if treated with respect and make great companions. As wonderful as Rottweilers can be, they aren’t the dog for everyone. You must not only be dedicated to training and socializing your Rottie, you must also deal with people who don’t understand the breed and pre-judge it. Because of bad or tragic experiences with Rottweilers or other large breeds, some cities have banned the breed. It’s unfair to judge an entire breed by the actions of a few, but it’s a reality you will have to deal with if you own a Rottweiler.

You can do your part to redeem the reputation of the breed by training your Rottweiler to obey and respect people. Most important, don’t put your Rottie in the backyard and forget about him. This is a dog who is loyal to his people and wants to be with them. If you give him the guidance and structure he needs, you’ll be rewarded with one of the finest companions in the world. 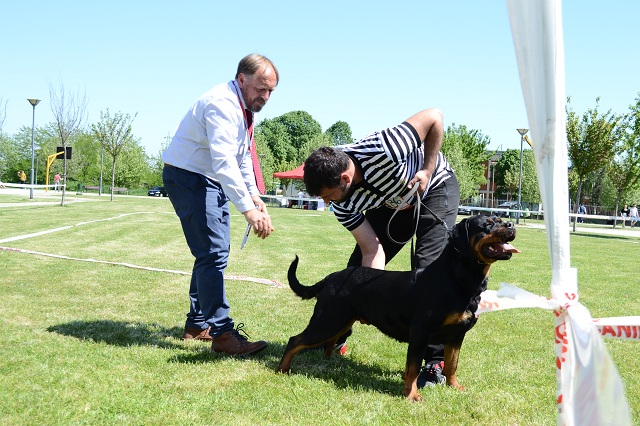 The ideal Rottweiler is calm, confident, and courageous, never shy. He has a self-assured aloofness and doesn’t make friends with people immediately or indiscriminately. Instead, he takes a wait-and-see attitude with new people or situations. With his family, he’s affectionate, often following them around the house.

This is not a highly excitable dog. He has an inherent desire to protect his family and property, but should never be aggressive toward people without cause. The Rottweiler is smart and adaptable with a strong work ethic. You’ll see some differences between the sexes. Males are quiet but watchful, constantly assessing their surroundings for threats. Females are somewhat easier to control and may be more affectionate. Both are highly trainable but can be stubborn. Rottweilers require firm, consistent but not harsh discipline.

A sharp word is often a sufficient reprimand, but only if you’ve clearly established your leadership. If not, he may try to bully or bluff you. This is not a dog for people who lack assertiveness or don’t have time to devote to training and supervision. Earning a Rottweiler’s respect involves setting boundaries and teaching consequences for inappropriate behavior, both of which take time and patience. Temperament is affected by a number of factors, including heredity, training, and socialization. 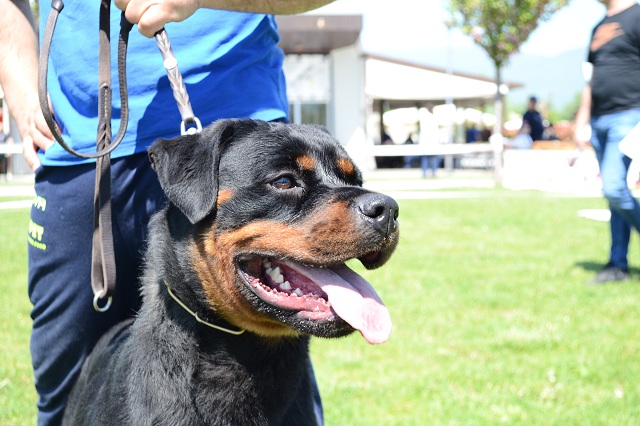 Puppies with nice temperaments are curious and playful, willing to approach people and be held by them. Choose the middle-of-the-road puppy, not the one who’s beating up his littermates or the one who’s hiding in the corner. Always meet at least one of the parents — usually the mother is the one who’s available — to ensure that they have nice temperaments that you’re comfortable with. Meeting siblings or other relatives of the parents is also helpful for evaluating what a puppy will be like when he grows up.

Like every dog, Rotties need early socialization — exposure to many different people, sights, sounds, and experiences — when they’re young. Socialization helps ensure that your Rottweiler puppy grows up to be a well-rounded dog. Enrolling him in a puppy kindergarten class is a great start. Inviting visitors over regularly, and taking him to busy parks, stores that allow dogs, and on leisurely strolls to meet neighbors will also help him polish his social skills. 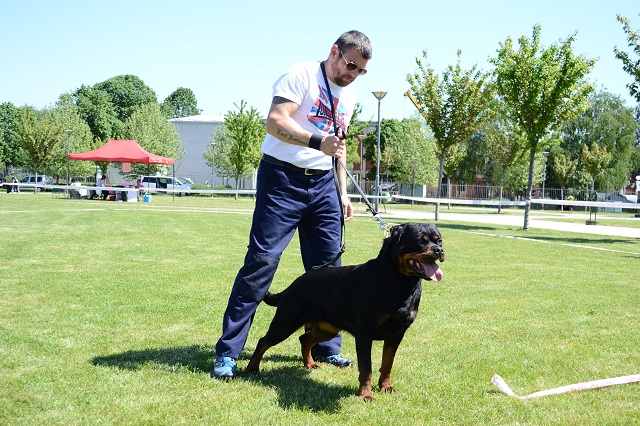 On April 21st, some of Dog Trophy members attended at VII Macedonian Club Sieger – dog show for the Rottweiler breed only.

“We didn’t know what to expect, but once when we got there, everything was perfect. The organization, the venue of the dog show, the judging panel and the quantity and quality of the dogs exhibited there were amazing. This annual dog show was organized by the Macedonian Rottweiler Club (Makedonski Rotvajler Klub) and I must say that we couldn’t find any issue in every aspect of the organization, no matter how hard we tried.

The venue of the show was also nice – a local park nearby the center of Skopje. The show rings were quite spacious, so there was no issues with the movement of the dogs while exhibiting. The judging panel was – Honorable Judge Mr. Nicola Parrini from Italy and Honorable Judge Mr. Srdjan Knezevic from Serbia. While judging, both of the judges were giving detailed explanations about every single dog in the ring, which made the dog show even more interesting. I think that there were around 120 dogs to exhibit on this dog show and it was really amazing quality of the breed as you can see on the photos. We really had amazing time and this event will be a must-see on our list every year.” – stated Jan Tanna, our website co-founder.

Dog Trophy would like to say big THANK YOU to Macedonian Rottweiler Club and Mr. Nikola Angelkovski and Mr. Metodija Zafirovski for inviting us to be their guests of honor on this spectacular event.