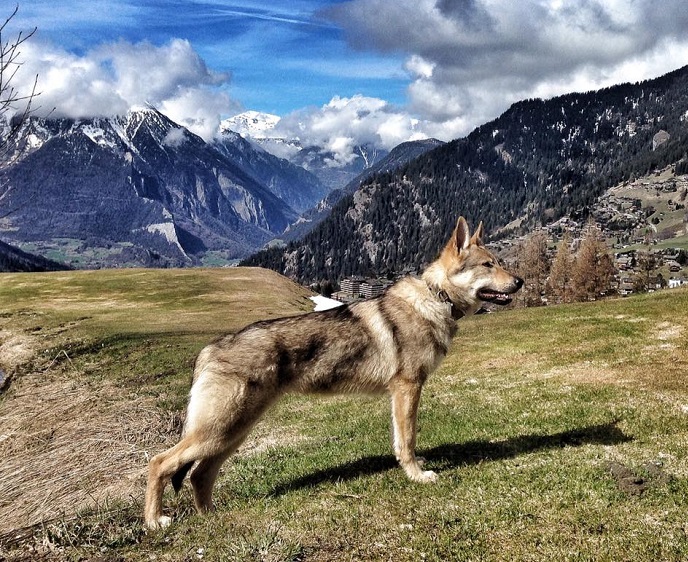 By name of the dog the Czechoslovakian Wolfdog, you can already assume that it is a special, especially interesting breed. Namely, this breed of dog originated in the middle of the 20th century in Czechoslovakia, for the needs of the army, by crossing a wolf and a German shepherd.

Czechoslovakian Wolfdog is dogs of larger build, but less weight, which allows them to move easily through space.

In appearance and character, in addition to the Sarlok Wolfdog, Czechoslovakian Wolfdog most closely resemble wolves of all breeds. Their average life expectancy is between 12 and 15 years, and what is especially characteristic of them is that they never bark, but howl, but that is why they have a perfect sense of smell.

Czechoslovakian Wolfdog are extremely lively and energetic, which is why they should not be locked up too much in apartments unless the owners have enough time to take them out for long walks and runs at least once a day.

Otherwise, dogs can get nervous and openly express their frustrations and dissatisfaction, even in the form of more aggressive behavior.

They are incredibly hardy by nature and have quick reactions, and they are also extremely brave and fearless, which, combined with the great loyalty they show to their owners, only proves that they will always protect their owners from potential enemies and even friends of their owners. , which the dogs had not had the opportunity to meet until then.

In these cases, they are extremely suspicious, but if they see that their owner is calm and does not show any fear or aggression towards the stranger dog, they do not attack him.

As for the relationship with the owners, they are very loyal to the whole family. Unlike some other dogs, Czechoslovakian Wolfdog do not get nervous in the crowd. On the contrary. These dogs are pack dogs by nature and they can’t stand loneliness in any way, so they will even enjoy life in a large family.

Czechoslovakian Wolfdog are healthy dogs and have no health problems. Only in some cases may there be problems with hip dysplasia.

You will often hear that the owners had problems with the training of the Czechoslovak Wolfhound.

Although they are a mixture of German shepherds, for whom the rule is that they are extremely obedient and calm, their wolf side can still prevail, which does not allow control.

RELATED ARTICLE:  Belgian Shepherd Dog will take care of you like your parents!

What you need to be aware of is that the behavior of Czechoslovakian Wolfdog only depends on their owners.

Owners who do not start training and adapting the dog to other people and animals at the very beginning, they will hardly be able to achieve that in the later future, when the dog’s personality has already been formed.

If you don’t really start socializing your Czechoslovakian Wolfhound, he will become very nervous and frustrated at a later age when he is in the presence of other people and animals, and he will often show some signs of aggression towards them.

If, on the other hand, the dog’s temperament is treated adequately and tempered in time, you can be sure that he will be very attached and loyal to small children, towards whom he will be protective, while she will be able to play with him in any way. they want to, and they will get along with animals of all sizes.

In order for the training of the Czechoslovak Wolfhound to be successful, it must first have a set goal, and the longer the focus is on getting the dog accustomed to a certain sign or behavior, it must have more training methods, so that the dog is interesting and does not lose interest.

Czechoslovak Wolfhound can be fed yogurt and raw eggs. In small quantities meat from organs and seafood such as oily fish, herring, sardines, and even fish peel. To summarize, raw meaty bones and raw meat should make up approximately 70 to 85 percent of the diet.

Keeping pups is not particularly demanding and only involves proper care for regular vaccinations and revaccinations.

These dogs can normally give birth only once a year and during one pregnancy they can give birth to between 3 and 6 cubs.

During the 20th century, more precisely during the 50s of the 20th century, the Czechoslovak military forces, CSSR, decided to make an experiment, in which they would cross the 4 best individuals of wolves and German shepherds and thus form a perfect breed that would accompany them in their military. feats.

Different crossings of male dogs and female wolves and vice versa lasted until 1965, when this experiment was stopped by the army, but taken over by cynologists, who, thanks to the good genetic material carried by the cubs, managed to continue and standardize themselves. race.

The first litter of Czechoslovak wolfhounds, named F1, was born in 1958, and the first father of the cubs was the champion, Karel Hartl. By pairing these two species, a breed was obtained that was characterized by the temperament, mentality, and intelligence of the German Shepherd and the strength, attitude, and endurance of the wolf.

While the military-focused more on correcting the character of this species, cynologists later focused more on standardizing the physical appearance of individuals.

Czechoslovakian Wolfdog was first used for the needs of specialist military units, and later their potential as a shepherd and herd keeper, rescuer, capable companion in hunting, and even as a cuddly pet, next to which the owners always feel safe. The Czechoslovak Wolfhound was recognized as a separate breed in 1999.