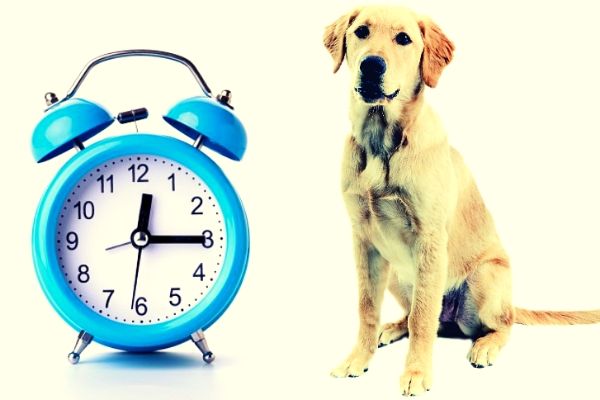 Does the Dog Know What Time it is? It’s five o’clock and your dog is excitedly wagging his tail and pushing you with his snout. Your furry friend is hungry and seems to know it’s time to feed him. But is this all a simple reaction to bowel movements or are dogs really able to sense how many hours there are?

Many owners will tell you that their dog can predict the time for dinner or the time when he usually goes for a walk. Some owners claim that their dogs recognize these important moments in a minute, informing them at exactly 5pm that a meal should be served or maybe at 4:49 or 5:01, sometimes 5:03, but literally never more than five minutes sooner or later.

It’s as if the dog is interpreting a signal, perhaps from the amount of light or some other feeling that tells him how many hours there are. But time is a human invention, at least in the sense in which we usually think of it, in seconds, minutes and hours. Can dogs, or other animals, really understand time the way we do?

Cognitive scientists are interested in the ways in which animals form memory, mainly because it helps us understand how our brains work. Researchers often divide long-term memory into two categories. There is an implicit memory, a subconscious memory, that we use to perform tasks that we have learned and repeated many times in the past, such as tying shoelaces or riding a bicycle. And there is a declarative memory, in which we store personal experiences and factual information that make up our life story.

Dogs and other animals have an implicit memory, which is used for learning by trial and error, or conditioned reflexes. But there are still ambiguities as to whether (non-human) animals have declarative memory. Researchers are particularly interested in understanding whether animals have what is known as episodic memory, or the ability to recall information in the context of past events, such as what happened, or where and when it happened.

Scientists have studied episodic memory in apes, monkeys, rats, bees and some birds, including crows. Many experiments have tried to determine whether these species have a special memory, that is, the ability to recall the basic facts about what is happening: what, where and when. The scheme of this test for each animal is quite simple.

Let’s say you give a chimpanzee two closed opaque jars, both of which contain a treat. In one jar, there is a delicacy that does not disappear, such as grapes. But the other contains a delicacy that can be enjoyed for a limited time, such as a frozen juice cube, which will melt. After five minutes, the chimpanzee was given the opportunity to open one jar. An hour after, he can open another.

After the test is performed several times, most animals will first open the jar in which the sweet tooth is disappearing. Through experience they learned that if they waited too long they would not be there soon.

Bonobo monkeys, chimpanzees and orangutans are very successful in solving this test; they seem to possess this kind of episodic memory. Rhesus monkeys have so far shown that they remember What and Where but have a problem with When. Even bees seem to have some sort of episodic memory related to their cyclical rhythm.

RELATED ARTICLE:  14 Perfect ways to calm your dog during the thunderstorm!

And while there is ample evidence that dogs remember people (such as their owner) and events (such as going to the park), the question of whether they can travel back in time in consciousness is still open.

This is because man’s best friend is, unfortunately, neglected when it comes to laboratory experiments. For a long time, scientists thought that since dogs were domesticated, they could not prove anything about how natural species behave. It is only in the last 15 years that more detailed research into the mind of dogs has begun.

So do dogs know what time it is? Maybe, but we really don’t know that. But there are some interesting ideas about it, if they can, how they do it. These ideas are not supported by scientific evidence.

Dogs, like most mammals, have a cyclical rhythm, an inner sense that tells them when to sleep or when to be active. Maybe it’s their body, not their mind that can roughly determine what time it is. So if your dog is used to getting food in the middle of the afternoon, his body becomes hungry around this time and he excitedly starts to disturb you, demanding a bowl.

Another explanation may come from the fact that some animals understand the order in the environment. It is possible for dogs to use the length of the shadow to know what time it is.

Some researchers believe that dogs use an advanced sense of smell to smell how long it has been since an event. When you leave the house, your scent stays, slowly disappearing during the day. If you have a fairly normal schedule, it is possible that your dog will realize that by the time your scent disappears, you will unlock the front door to some extent (and he must be ready to run to greet you).

With the experiment, the researchers managed to deceive the dog by cunningly, by spreading the smell of its owner through the house, leaving the pet confused when he sees that the owner is returning at the usual time. While this does not prove that a dog can smell time, this is an interesting idea.

Despite the fact that there is still no good answer as to whether the dog knows what time it is, it could appear in a few years. Dogs are getting more and more attention from scientists and it is almost only a matter of time before they will be tested for a special memory. Cognitive scientists are especially interested in discovering the roots of our ability for episodic memory.