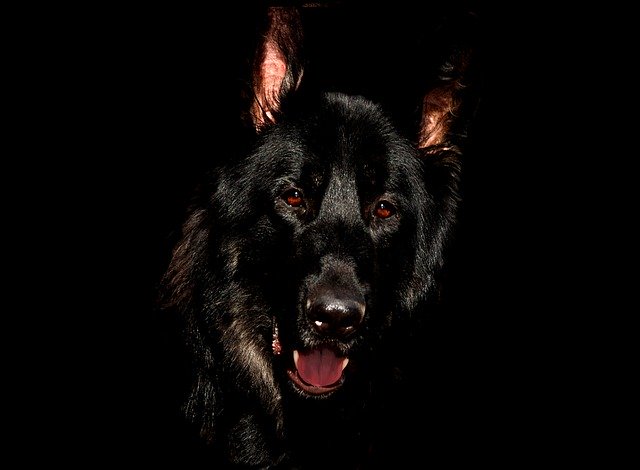 Can Dogs Be Scared of the Dark? If you were in a situation where you left home in the evening and left your pet alone and forgot to leave the light in a room, you probably spent the whole evening thinking about what he is doing and how he is in the dark.

Whether the dog is comfortable in the dark, whether he is afraid in the end, whether it is necessary for them to leave the light source when they are left alone in the house, is something that needs a little thought.

Dogs have much better vision in the dark than humans. The reason for this is the specific anatomical structure of the eye and it allows them to see much more even in the dark, even with a very small light source. This is one of the reasons why they will react to many movements by looking out the window during the night – mostly by growling and barking, which mostly upsets or annoys you.

However, what happens in pitch darkness without any light source. Well, we are very similar here, in fact, neither people nor dogs see anything. Many owners claim that their pets can safely move around the house during the night, without tripping or hitting obstacles. That is true, but it is not because of better vision, but because of the ability to remember the arrangement of objects in space faster.

This is very easily proven if the dog is placed in some obstacles on the usual route he uses during the night. And he stumbles and encounters those obstacles because they are new and he has not had the opportunity to remember them from before. In fact, dogs move through the dark of memory and that is why there are problems if they are in completely unknown terrain.

RELATED ARTICLE:  Dreams About Dogs | Subconscious Mind Wants to Tell You Something

However, when we talk about leaving dogs in the dark, the main question should be: do dogs feel safe in such a situation? If he feels safe, then he won’t be angry with you for forgetting to leave the light on. Some dogs like to sleep in a fully covered area such as a blanket covered with a blanket, or crawl into a closet with things. However, they usually do this when there is someone else in the house. If they are alone, they must come out of such a space and sleep outdoors with a light source. So, they do not like darkness and loneliness. Many also have a more pronounced behavior by which they show their dissatisfaction – whining, howling, and barking.

In essence, there is no particular reason for the dog to be kept in total darkness, ie not to be left with a light source. What should be taken into account is the temperament and character of the pet. If he likes to run around the house and play and still has a company such as another dog or cat, the potential consequences of such behavior must be taken into account. In such cases, do not leave floor lamps or lamps on lower shelves on. In the game and rushing, they can knock them down, and in some cases, that can cause a fire in the house. Of course, there is also the danger of sharp broken glass or ceramic parts. For dogs that do not like to be left alone, you can leave the TV on because it will make them feel as if they have not been left, and it will be a sufficient source of light.

If you are forgetful, extremely frugal, or simply think that you should leave your pet in the dark, pay attention to the following situations upon returning home.

– Is the garbage can overturned and the contents scattered around the house
– Are something broken or bitten?
– Is the dog extremely upset?
– Whether he urinated or defecated in the house
– Did you find him hidden in any part of the house
– Are there any injuries on his claws as if he was digging in the door

Make sure your neighbors hear the dog barking or howling for a long time during your absence – although they will tell you! If something like this occurs when you leave it in the dark – then the point is clear. He does not like darkness and you have to leave him a light source to make him feel safe and comfortable even when there is no one in the house.

On the other hand, if this behavior is regular and during the day when he stays alone in the house, then it is a behavior disorder. It is usually anxiety caused by separation and it is a problem that is solved in another way. All in all, all dogs are different and there is no one-size-fits-all answer to the question in the title. Observe and get to know your pet and then make the best decision first of all for him.