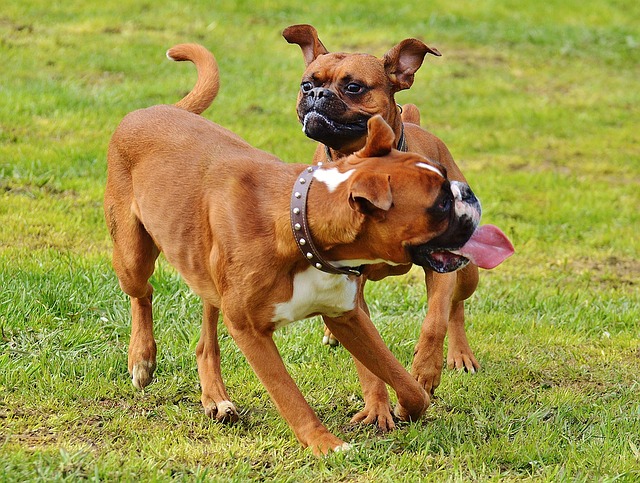 Boxers are often described as clowns and eternal puppies, but everyone who has even met them knows that these big dogs have an even bigger heart.

1. They come from Germany

Boxers are the heirs of an extinct breed known today as the Bullenbeisser, which in German means “the one who bites the bulls.” It is a large breed that also had a lot of influence on bulldogs and mastiffs. Bulenbeiser was bred in Germany as a dog that was used to hunt large game such as wild boars and even bears. Over time, they began to breed smaller specimens in Belgium, which were used as butcher and cattle dogs. These smaller specimens are believed to be the direct ancestors of the modern boxer. By 1895, Munich had its first boxer club, which set breed standards.

As the name suggests, these dogs have an impressive left direct. When playing, members of this race have a habit of standing on their hind paws and kicking forward with their front paws like human boxers. Many believe that they got their name from that, but there is no evidence that it is really so.

3. Their head shape has a purpose

Boxers are known for their unusual head shape. By breed standards, their snout should be half as long as their skull. Together with the protruding lower jaw and strong teeth, it helped the boxers to bite and hold their prey firmly. These dogs were bred to be able to bite the animal and keep it that way until the owner arrives, and the short snout helped them to be able to breathe normally all the time.

4. Some have really long tongues

The record in the category “longest dog tongue” was held by a boxer named Brandi. His amazing tongue was an impressive 43 centimetres long. By comparison, the longest human tongue ever measured was only 10.1 centimetres. Among the dogs, Gene Simmons lived in Michigan with his owner John until his death in 2002.

RELATED ARTICLE:  How To Teach your Dog To Become a Cat friendly?

5. They became famous during the war

During World War I, boxers were one of seven races chosen to help German soldiers. In World War II, the race enchanted other sides as well, so they were “employed” by American soldiers. Loyal dogs at the front carried messages and groceries, and helped find wounded soldiers on the battlefield. Dogs were considered ideal messengers at the time because they could run fast across different terrains, and there was no great chance of being killed by a sniper. The boxer became even more popular after the war, and the British Kennel Club accepted them in 1948.

6. They are not represented in Hollywood

Boxers are the eighth most popular in the United States, but they are not nearly as present in movies. Unlike German Shepherds and Jack Russells, boxers get very little time on the big screen. The situation was different at the very beginning of the film, when boxers starred in some of the earliest Hollywood productions.

7. They are bothered by bad hearing

According to the American Kennel Club, boxers can have three colours – light brown, tiger or white. Although all three are allowed, white carries some serious health risks. White boxers are often deaf.

8. They need time to grow up

These dogs suffer from a serious case of Peter Pan syndrome. Boxers need about three years to reach maturity, which makes them the dogs with the longest childhood.

9. You need to clean their creases

Like hunting dogs, boxers had to hold their prey long enough until the hunter caught up with them. The creases on their faces served as channels to drain the blood from their eyes. Today, these dogs mostly lie in apartments, so their folds only serve to make them look sweeter. However, to prevent infections, you need to clean their wrinkles regularly.

RELATED ARTICLE:  Learn how to properly clean and brush these little but brave dogs !